Marty came by today to help with the BMEvideo update (it's still uploading — 2.5 gig of new videos), and we're guessing that his piercing is going to reject from his uvula within the next twenty-four hours (and then later, reject out of his ass, because he'll swallow it — the odds of aspiration are very slim).

I imagine mine will reject in time as well, but I'm really not sure when. I'll document it as well when the time comes… But anyway, here's where Marty's is at.

Other than that, we used the remote power system today to reboot IAM after who knows what server terror occured, and everything seems to have come back up very quickly (although it's death rolls were not fast, ha, thus the hard power-off-on reboot). Well, I'll post updates later in the day… Just waiting for them to finish moving from Dundas and Bloor to Bay and Front, ha!

My friend who has been rebuilding this car so it's road legal again for me came through and I'm driving the Porsche again! I took the first picture, but the rest are all by Phil (we drove down to Cherry Beach to take some photos). I know, I keep saying it over and over, but I love driving this car, especially when the exhaust opens right up (it has an active exhaust on it that's “normal” for “normal” driving, but when it detects you driving aggressively it opens up to straight pipes)…

To get it on the road I had to replace the headlights, one of the catalytic convertors, an oxygen sensor, and deal with a bunch of weird paperwork and other things like that. I'm not a fan of paperwork. Other than the obvious stiff joints of a car that's been in storage for two and a half years (since I briefly relocated to Maui), it's running quite nicely… When I can afford it I'm going to give it a visual overhaul and do some continued engine upgrades on it. Having watched that video of a guy hitting 341 kph in his Porsche on a highway looks pretty fun.

Anyway, I know I've said it before, but for anyone that doesn't already know and isn't bored silly of me repeating it, this is a 2001 Porsche 996. Other than the engine work, it's been repainted black on black, lowered, and had a few meaningless options added over the past few years (6-disc, cup holders, and stuff like that)… and its verified (as in this car has actually driven it) top speed is 307 kph but I'm pretty sure it'll go faster with the right maniac behind the wheel.

So yeah, say hello to the new/old BMEmobile and from time to time the Wheels of Fury as well.

So I'm thinking about adding a “contact via picture” feature (don't worry, it won't act as a spam portal, and users will control their own access levels) to BME, all through an anonymous interface. It's mostly intended (or perhaps exclusively intended) for BME/extreme and BME/HARD. Outside of anything else (like people being able to privately discuss their lives), it'll facilitate the ability for heavy-mod practitioners to have clients submit photos and stay publicly quieter (and play with less legal fire), but go back to the oldschool methods of having former customers act as a screening network to keep out the J. Edgars out of our private lives. Who I assure you are reading this post.

Anyway, in sadder news I've somehow misplaced all of my photos from 2003 (which means the only pictures I have of my Porsche right now are off my IAM page's archives!)… I have lots of pictures of Rachel's (the red '99) because we got hers a lot earlier, but I got mine much later when a miracle deal game up that I couldn't pass by. Anyway, I really miss that year. While admittedly it played a role in my downfall, I really like living out there. When I get my finances in order I'd love to get a farm again. 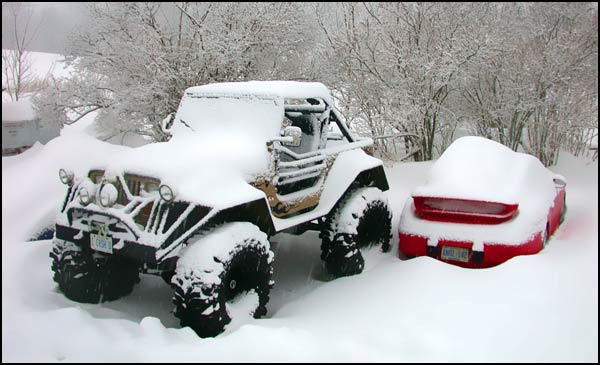 Anyway, time to make breakfast and get this computer prepped for Phil. There should be an update later today but I may do the same as last time and do a double update tomorrow night… In some ways I like that schedule too.

So I was looking at the new Porsche ad, and at first it struck me as bourgeois and classist, as if flaunting its financial value to those who couldn't afford it was part of the worth, or making fun of the poor, unhappy sods who were short of the loot required to achieve bliss. See what I mean: 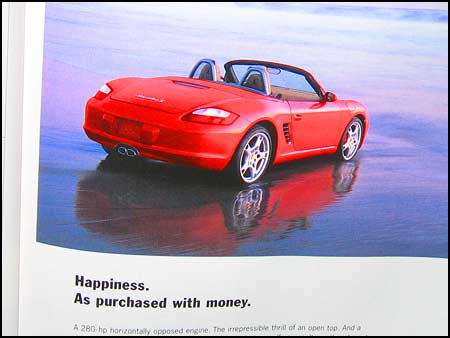 But then I thought about what it's like to drive a Porsche (or similar high-end car/bike/quad/sled/whatever), and I'm sure it sounds silly to anyone who hasn't, but it really is incredibly fun and really is almost automatic happiness a la sex or great food or other carnal acts. I really miss my old car and am looking forward to putting it back on the road. It's been sitting on the same new tires, but undriven, for almost three years so they may be messed up from it… I told Rachel she could do donuts on them until they catch on fire for some movie if they have to be replaced (it's being painted anyway). 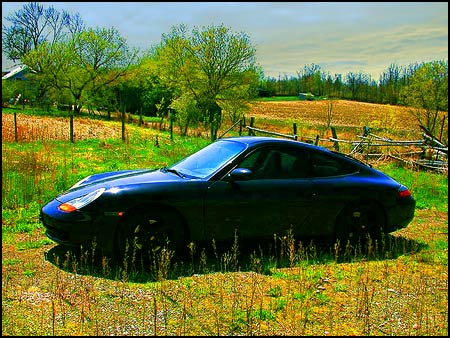 She'd better not destroy it because I've told other people I'd use it to teach them to drive (and I'm going crazy to drive it myself). Anyway, I just wanted to publicly (but anonymously of course) thank the person who sent me the postcard below, it really cheered me up. 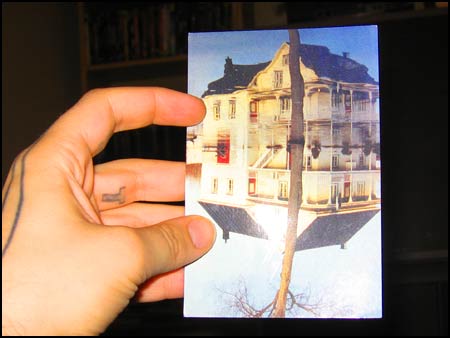 Well, I'm going to post a little to ModBlog and go to bed.