Another day, another pill

Writing about this stuff is difficult for me; it's a lot easier to indulge in and write about your strengths than your weaknesses. Still, mental illness is not something that people should be ashamed of any more than getting sick in general, and I hope that by writing here I send the message that it's not something you need to hide. And, let's admit an uncomfortable truth — for many people, body modification is a form of self-therapy (which is part of the reason that I've tried to defend difficult subjects like underage body modification and even cutting — because I know it's saving lives).

But anyway, I guess that a whole bunch of things caught up on me all at once (financial stresses, increased workload, of course the recent breakup, business issues, and the stress of the finger surgery) and just pushed me past my thresholds and I kind of hit that level where if you don't seek help, it's nervous breakdown or even suicide time… and I've been there before and don't want to go there again. I guess though the good thing about the breakup and my cousin killing himself is that it emphasized to me that if I felt bad, I needed to get help.

I spent today at my old psyche ward home, and for the first time in about ten years have regular appointments with my doctor (the top suicide specialist in Canada). I'm not feeling too hot, but I know I can make it to my next appointment (someone gave me the “one day at a time” advice here online, and it's good advice). Since I know that probably 90% of the people reading this can relate quite directly to what I'm talking about, I'm on some low-level SSRI (although I won't feel that for a few weeks) and have a little lorazepam as well which I may or may not take… My doctor is aware of my other drug use and didn't seem too concerned about it, but I'm working on reducing that as well. 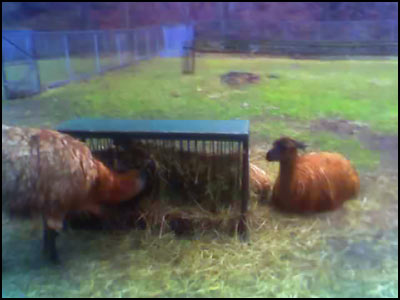 So yeah, one day at a time, and in those days I'm trying to find special moments as well… I went with Nefarious today to the park, and played a little in the big castle until it started to rain (and thunder) heavily. A mad dash to visit the llamas, who seemed quite unconcerned by the downfall, and then back home to see how Phil was doing with the day's work. By the way, I should add that Phil is currently doing the vast majority of image processing tasks on BME these days!

Other than that, I also ordered two terabytes of harddrives today and a RAID controller card for them, so we should soon have a terabyte of storage for IAM (which will be used to store pictures and so on). Once we have that NAS running, we'll work on upgrading some of the other hardware powering the site as well so that I can remove the user cap and we can start growing again. I also found a local supplier for the telephony card I wanted to use so that might happen as well soon.

I'm going to do my best to keep ModBlog maintained over the next while, but I do have to do a little trimming of my workload so I apologize if I make less daily posts until I get myself back on my feet. Anyway, I consider a great deal of the people who read this my friends even if I don't talk to them every day, so I hope you didn't mind me writing so personally here if you're a total stranger!

Now, I'm perfectly aware as a “Mental Non-Health Survivor” or whatever the fuck the politically correct term for “crazy person with a history that proves it” is, even if you're “cured”, this shit never goes away… But I've been wondering if my brain is really the main cause of how I'm feeling right now.

As I mentioned, I've lost about ten pounds in the last week (or less). I've also been insanely tired (my sleep requirements have basically doubled), and have had trouble regulating my temperature (perceptually at least; I always feel cold). I have no idea how the pills I am/was taking are causing me to heal as fast as I appear to be from this magnet extration, but I'm assuming they must cause my body to kick into overdrive and maybe it's that which is draining me? 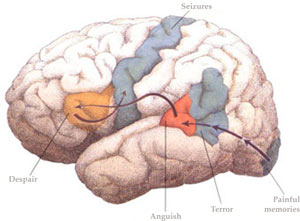 That said, I think it's also very natural to say “surely it's not my mind” and look for another explanation when tricks of the mind are often the simplest explanation. I don't really know. All I know is that rather than wallow in it I'm doing everything I can to achieve a solution with help — because I really feel like I need some help right now — which I think is good, because in the past I'd not have done so.

I showed Nefarious today how my Wacom tablet works… Here is the first picture she drew on it. It's a dinosaur. I'm not sure how well I drew as a two year old, but I think this is pretty good? Probably all parents think that.