Audio interview with me…

Oh, I almost forgot to mention this — a little while back I did an audio interview with the folks over at small WORLD podcast. The audio quality on it is fucked (I don't even sound like myself: compare it to the recent ARM TV interview), but it's still not so bad, especially considering we did the interview twice due to technical problems the first go around! 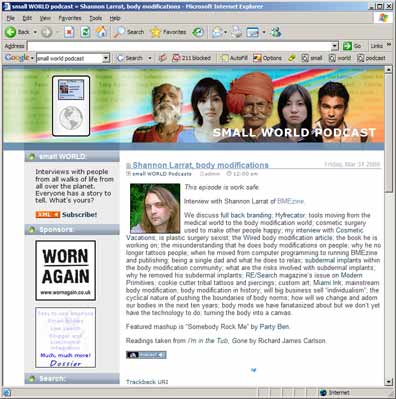 PS. It's Badur's back that I mention at the very start because we recorded the episode just after the branding session.

I've done another update on the military/combat photo site… Today is mostly pictures of blown up vehicles and IED damage and mortar attacks (rather than “travel photos” specifically). Anyway, if you're interested, click on through. BME update will come later tonight still. 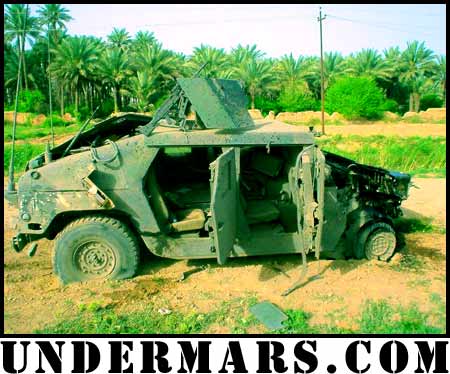 Expanding on what I mentioned earlier, the earth has about 12 million square kilometers of arable land. That's about 7.7 billion acres, or just over an acre per person (on average, if it was all used). The United States has tons of arable land, about 400 million acres, but because of the large US population that's still not much more than an acre per person. Canada has less arable land (about 112 million acres) because so much of our nation is desert and otherwise inhospitable, but because of our small population we have about three acres per person.

I'm told that you can feed a family of four using about an acre of land and a couple of goats and perhaps some chickens (highly efficient animals)… But to achieve that type of volume in a way that isn't instantly voided by peak oil, they have to be small scale farms producing for local markets. If enough of the right crisises hit at the wrong time, it's going to get real miserable for folks who don't live in North America (I strongly believe that North America will turn out fine — Canada and America combined have a ton of fresh water, mineral, oil, and farmland), and our populations are stable and we're very difficult to invade.

I'll tell you though, I don't think I'd want to be in Europe come fifteen years from now when the shit hits the fan and we realize that the real war isn't for oil, it's for fresh water and food. I'm thinking that over the next two years I should try and set a goal of fixing my finances and buying a small farm with a nice forest somewhere near the city (where should I go?)… I know if there's one kind of people I'd like to be around if the world goes to hell, and that's farmers, and if it doesn't go to hell — a boutique farm in a boutique town sounds quite nice too. Somewhere lush.

Oh, and in terms of the crisis I mentioned in the previous entry… old people make great farmers!

[Yes, I know that you can make these numbers genuinely scary if you take into account water pollution... But I'm trying to be upbeat in a "wow things are fucked up, but we can make it through this" sort of way].

I really shouldn't even look at the news, it just upsets me.

You know, it's shit like this that really freaks me out. Short version: Americans have no savings and no retirement plans. Let me let you in on a not-so-secret secret: non-agrarian capitalism is a pyramid scheme. It works great when your population is exploding and your nation is expanding its business empires around the world, but the problem is, the world is all we've got, and it is finite in size and resources.

So the pyramid scheme does have an end and we may be nearly there. There are virtually no first world nations with a positive internal population growth. Even with immigration, the populations are aging fast and there are no resources to support them. The only thing left that can keep a large capitalist system going is war, and the only thing that achieves is let the people at the very top steal billions — and it's billions they'll need as hyperinflation decimates the savings of people who aren't either phenomenally wealthy or weirdos who have their money in gold and guns.

Should I even bother mentioning that the latest leaked Bush memo shows that before the Iraq war he'd announced they'd invade whether they found weapons or not (the whole time telling the American public he was doing everything he could to stop the war), and that if they had to they'd paint a US plane with United Nations insignia and try and goad Saddam into shooting it down? I couldn't make this shit up, it's pure evil, huge mass murder both of Americans and people around the world. But let's get back to money, because the fear driving those murders is the mad rush to scrape off the best resources as we head toward the end.

And the problem is that this financial collapse hits at almost exactly the same time as the peak oil crisis takes out our industry and supply lines, Islam and Christianity smash heads in an immense idiotic and pointless battle, the environment begins shutting down, and… and… and… Not that “Bird Flu” isn't manmade, but is it any wonder that top-ranked scientists are currently receiving standing ovations for proposing that we on purpose create a pandemic with the goal of killing 90% of the humans on the planet? Read that article, seriously.

What do we have to look forward to after all this?

Here's a link to an interview I did with Gary over at ARM TV. It's free to watch but you have to have Real Player installed (and if you full screen it the quality goes up). I think the interview is OK, but I sure look furry and tired! Thanks Gary for making this a free download! 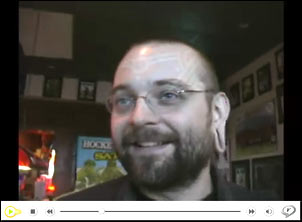 Other than that, I'm trying to adjust into these meds. I can't say I feel too hot yet but that's to be expected. I'm sort of paranoid because of all the SSRI horror stories, but what can I do really? Drink so much that I don't notice? I tried that quite a while back, and all it got me was more problems… Another appointment in 48 hours so I guess we'll see how I feel then.