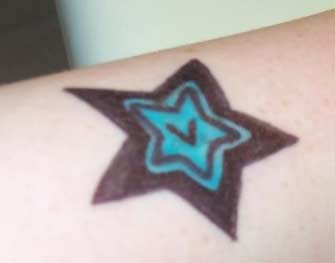 Thank you so much for sending in a picture of your wonderful star tattoo.

I'm sure you can guess your password for the site -- I've tried to pick one that would make sense for someone like you. Good luck, and enjoy the site. I'm sorry I can't be more specific, but the law's the law, you know?

I'm get more amazed every day that Americans don't just totally lose it and start shooting politicians. Even if one doesn't want to believe they could have prevented 9/11, it's so damn obvious that everything that's going on is a TV sham… I mean, even the mainstream news is running stories about how things like “Weapons of Mass Destruction” and “Saving Private Lynch” were fabricated events (more). From the LA Times article:


Though the Bush administration's shamelessly trumped-up claims about Iraq's alleged ties to Al Qaeda and 9/11 and its weapons of mass destruction take the cake for deceitful propaganda — grand strategic lies that allow the United States' seizure of Iraq's oil to appear to be an act of liberation — the sad case of Lynch's exploitation at the hands of military spinners illustrates that the truth once again was a casualty of war.

Jessica Lynch has been locked up in a private hospital with 24/7 security that won't let her talk to any outsiders. Troops in Lynch's company have been ordered to not talk about the incident (more), one saying. “It's almost 'say a word and you'll be shot at dawn.'”

I'm sure most of you have seen this article (more) written by Warren Buffett talking about Bush's “tax cuts” (that is, transfer of money to the rich). An excerpt:


[If] Berkshire Hathaway ... decide to pay $1 billion in dividends next year, [o]wning 31 percent of Berkshire, I would receive $310 million in additional income, owe not another dime in federal tax, and see my tax rate plunge to 3 percent.

Administration officials say that the $310 million suddenly added to my wallet would stimulate the economy because I would invest it and thereby create jobs. But they conveniently forget that if Berkshire kept the money, it would invest that same amount, creating jobs as well.

Instead, [why not] give reductions to those who both need and will spend the money gained. Enact a Social Security tax "holiday" or give a flat-sum rebate to people with low incomes. Putting $1,000 in the pockets of 310,000 families with urgent needs is going to provide far more stimulus to the economy than putting the same $310 million in my pockets.

He goes on to point out that the government can't give everyone a free lunch, but that it can choose who gets that free lunch. And, he of course comes to the conclusion that having billions of dollars already, people like him really don't need a free lunch and that it's wrong for the government to make the poor and middle classes pay his way.

What blows me away is that I still constantly see people supporting this lunacy… I mean, if you're super-rich and it's going to help you, fine, then you're just evil and selfish. But if you're middle class or poorer and you support this, well, you're stupid and/or self-destructive… and that's a fact, not my opinion.

I'm sure everyone knows this, but the level of surveillance that the US government is fighting to have over its people (I say “its people” because it's clear that it believes that it owns them) is growing to be rather terrifying (more, more, more)… Americans should be warned that they are now living in a world where every word they write online can be accessed by the government without a warrant or probable cause. All it takes is a neighbor who doesn't like you making an anonymous call fingering you as a terrorist sympathizer, a Constituionalist, a tongue splitter, or whatever else the evil-word-of-the-day is.

Well, US troops are promised to the Phillipines now (more) — after all, it's a major oil reservoir and also a hotspot for al-Qaeda operations. Perfect place to send US troops if your goal is to endanger the people of the United States (more, more). Lucky for them Bush and his Cabal are not in fact Americans, but citizens of multinational corporate entities — every dollar in their pockets is paid for with the blood of the people of this world. In the past they kept most of that vampirism outside the continental USA, but that time is over…

PS. In the quorum debacle in Texas, the DPS has ordered the records be shredded (more)… Draw your own conclusions as to why they'd shred public records before anyone had a chance to see them.

Those of you who monitor the newsfeed have probably seen the stories about the warnings regarding piercings and tattoos being issued in Australia (more, more). The government is stating that anyone helping a minor (15 years old and younger) getting nipple piercings or genital piercings — including both the piercer and the parent that approves it — will face up to fourteen years in prison. If the person is 17 or younger the same penalties apply for tattoos.

So basically they're saying that until you reach 18, your body belongs not to you, and not to your parents by proxy, but to the government. I don't know about you, but I'm not comfortable with that… Do I think people should wait till they're 18 to get a tattoo? Probably yes. Did I? No. Was it a positive experience for me? Yes. Same goes for piercings. I am a happier and better person today because I did those things, and I don't feel any government has the right to try and steal that.

Reading the experiences on BME it becomes immediately clear that body modification is an immensely positive activity in many young people's lives. By passing insane laws threatening piercers and parents with dramatic jailtime, they make their feelings about this community very clear. For comparison, the penalty for murder in Australia is seven to fourteen years. That's right — we're actually being told that body piercing and tattooing are as bad as murder.

I'll also mention on the tongue splitting bill in Illinois that the Senate has approved the bill (more) but with one condition — deleting the provision that there must be a “therapeutic or clinical need” for the procedure. That is, they've said, in effect, that it may be done by doctors — they've given oral surgeons the green light to treat this as an elective procedure.

If doctors actually start offering this procedure, this could be a step in the right direction.

That said, if doctors say “thank you very much, but we're still not doing it” (a quite likely outcome) then it's a step in the wrong direction because it'll stop quality non-medical practitioners from doing it, leaving only the hacks. So we'll see… The house still has to approve the revision.

Some more info on the property… I don't know if I'd mentioned that all the power had been cut to the cabins. Now, when I say “power had been cut” I mean that the light switches had been torn out of the wall and the cables snipped. Real crazy stuff by a guy who grew to hate electricity.

I'm not kidding when I tell you that when I tell you that he “sold” the property to a couple seeking to open a lesbian wilderness resort, what I actually mean is that the former owner went survivalist, started amassing weaponry to prepare for judgement day, and was eventually shredded* by the bullets fired at him by a SWAT team.

The property is being offered to us at what is I think a fair price. I'm still up in the air on it I have to admit… While I understand that when it comes to Western countries, Canada is the place to be, I'm not 100% sold that the 21st century belongs to “the West”. I'm far more convinced that the future lies in Central and South America, at least as far as these continents are concerned.

That said, a decision like that comes with much more political unrest and crime, and with a warm climate you trade comfort for disease. Logically I don't think I could find a better “homesteader” property than this one. Plus it's literally five minutes off the highway and right next to a major city, but still totally wilderness so I would think it's a solid investment as well.

Who wants to come build this summer?


* Ok, I wasn't told “shredded”… I was told “taken out by a SWAT team”. I choose to tell the story dramatically… He was probably just dragged off in cuffs or something less devilish.

Via Transformation, by Pill or Scalpel:


"[Body modifications] are not just matters of vanity, narcissism or frivilous self-regard. They also concern my psychological well-being, the locus of my self-fulfillment. Enhancement technologies put me in touch with my true true self."

"There's a moral strand to it ... You're missing out on something if you don't live a fulfilled life. At other times, other places, it would have been getting in touch with God, or the good in yourself, or living life as a good citizen."