So… I can't tell you the details of it because it's a top-secret project, but I'm doing half of a split 7″ with Saira's band. Which means I've got an excuse to pick up some new gear. What I'm wanting is either a Warlock or similar guitar (getting back to my metal cover-band roots?), or a Vox guitar (getting back to my Joy Division cover-band roots?). I'm also looking for assorted pedals, etc.

Anyway, if you have any of that stuff and you either feel like donating or selling it to me, and are either in the Toronto area or coming to the BBQ, please let me know and we'll make a deal! 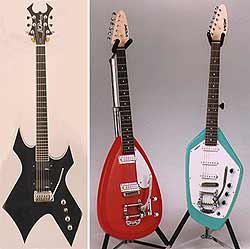 Update: Many thanks to Jack Ghoul for helping me out with this problem! 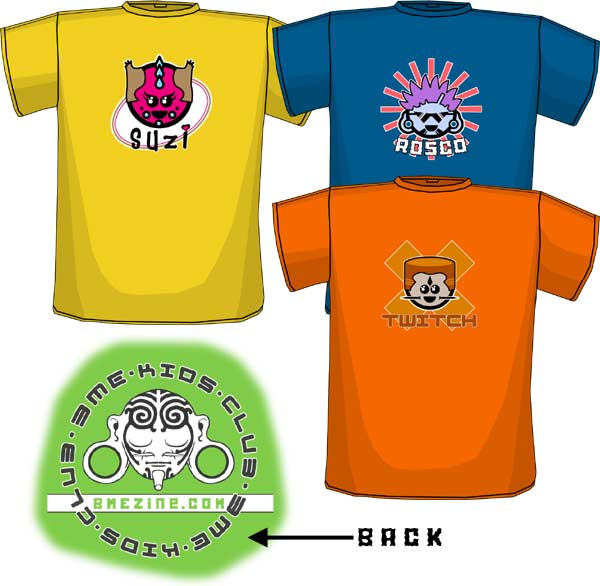 A while back one of the multitude of polls that run here said “have you ever met anyone interesting at the laundromat?” I did laundry today, and as is almost always the case, I met someone interesting. When I parked behind the laundromat, I was next a brand new extended cab Dodge Ram (I believe Mr. Haworth drives one too?)… Anyway, it wasn't long before the owner, a local metalsmith, noticed my truck, and we began talking about “car stuff”. Among other things, he was shocked that I basically got it for free — I paid between $15k and $20k below bluebook value (and no, it's not stolen). We talked about our mutual recent trips to Jamaica (I still had my photos in the truck!) and then about South America. He was Portugese and had spent some time in Brazil.

Anyway, I have a fairly large collection of subversive books from Loompanics and Paladin Press. However, I know enough about most of these subjects first hand, that I can tell you with certainty that the books should read as fiction. They're riddled with errors. I thought that what I read today, in “Homicide Investigation: A Practical Handbook” by “Burt Rapp” might amuse some of you (sort of like the Tribalectic stuff):


Injuries and mutilations of the genital area are always worth noting and photographing1. Members of homosexual and sado-masochistic2 subcultures use "cock-rings," leather straps or metal rings, fastened around the base of the penis and testicles, to enhance sexual excitement. While not harmful in themselves, these devices can provide investigative leads. Another type of sexual appliance is the needle3 or ring inserted into the penis, in a process known as "infibulation."4 A metal ring passed through the urethral opening and coming out of the bottom is called a "Prince Albert," and usually indicates a sado-masochistic subculture5 because cutting into the urethra and insertion of the ring are done without anesthesia by non-medical people6. Some devices are elaborate, fashioned of precious metals and inset with jewels.7

1 Well, we definitely all agree with that.
2 According to all my statistics drawn from this site, genital piercing is neither a homosexual or sado-masocistic activity.
3 What kind of deviant wears a needle as jewelry?
4 Uh, no. Infibulation is a chastity procedure that makes sexual activity difficult. Piercing is very rarely about that.
5 Again, no.
6 True, but this seems like a knee-jerk “didn't that hurt?” response which sort of misses the point.
7 It's quite rare for piercing jewelry to be particularly elaborate.

Ok, in Burt's defense — this book is copyrighted 1989, which actually makes it pretty ahead of its time for even discussing piercing. Given that, it's remarkably accurate. So I'm not really being fair.

Oh, and if you're wondering: Yes, the weird light yellow/green color is GLOW IN THE DARK. (Oh, and there's a white version of the IWASCURED shirt too). There are about 15 IWASCURED shirts, and 50 BBQ shirts. I've printed the sizes everyone has emailed me asking for, but they are FIRST COME, FIRST SERVE. So get yours at the start of the night, not the end.

PS. I know the sample about says “FIRWORKS”. The real one says “FIREWORKS” of course.

Not that it's anyone's business, but I forgot to mention the price of that Jamaica trip. Not including the flight to Montego Bay (which you can shop around for and often get for almost nothing), the stay cost us all of $345! And they even forgot to charge us our departure taxes at the airport! I'm telling you: If you're planning a vacation, don't not look into exotic locations because you think the price will kill you. It cost me far less to go to Jamaica than it did for me to go to Las Vegas a few months ago. Even Amsterdam didn't cost much — you can fly to Amsterdam for a few hundred dollars return, and the city is very cheap to stay in ($30 a night and up for hotels). Anyway, point is, for those of you that are jealous about the travelling I've done recently: YOU CAN DO IT TOO.