Everyone feels the same

I've gotten a lot of messages like this from people coming to the BBQ. I got a lot for the other BBQs as well. They all say something along the lines of “I'm worried that no one will talk to me.” Honestly, all the BBQs have been very laid back with lots of strangers mingling. As long as you're friendly, you'll have fun and meet people.

OK, not everyone… I just got this piece of “fanmail”:

I must say I find your site and work repulsive. To bad you can't show anything that is more then just a few hours old. One day (if it hasn't happened already) you are going to kill someone. And why are you trying to do plastic surgery you are no doctor. Maybe you should have learned how to do this before you thought it was cool to cut something or poke something. Get a life.

That's all that's in my fridge. You know why? Because I'm a good host. It is still officially a BYOB event, but I do have a little beer here. It seems like more than it is, honestly. I can't legally sell beer, but if you want some of mine, you MUST put a fair donation in the jar. You know what beer costs ($1.25 to $2.50 CDN depending on the kind), so make sure you cover what you drink.

Again, there is NOT ENOUGH HERE FOR EVERYONE. So do bring some if you can.

A couple notes: The Hobgoblin is Saira's. No drinking it. And the Kombuka is really cool — it's a lychee beer!

My wiring works! WOO WOO! I picked up some brighter bulbs too if we decide we want more light (but I doubt we will). And the motion detection works perfectly… But for the BBQ I'll just jack up the sensitivity and all that so it's on nonstop.

I just finished fixing the wiring in my back yard. The tower is totally wired for light, and the yard is totally wired for sound. I've replaced all the old cable with about three hundred feet of new wire — that took some time to cable-tie together! Anyway, with FOUR speakers hidden around the yard, the sound is REALLY nice out there… All that's left now is general clean up, prepping the tower, picking up some more lawn chairs, and pounding in all the tiki torches!

The official BBQ princess tells me that on Friday she'll do the URL stencil for the tower. I suspect that she'll also paint over and re-do my crappy crosses.

I'm not very good at stencilling it turns out. My hand it totally red from spraypaint, and it's not the greatest. It can be fixed another day… But you have to admit that it looks better with the red cross. I was supposed to put on the URL as well, but if I can't do a cross, there's no way I can do 26 (13+13) letters. 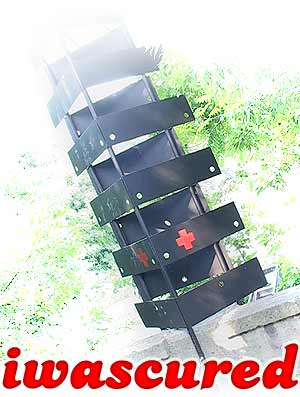