I've been waiting for this one to come out for a while:

I've written about her before here, but I wanted to briefly mention who Rachel Corrie. She was a peace activist who was brutally crushed to death by an Israeli bulldozer (echoes of Tiananmen Square). Her killing was denounced by Amnesty International and several Congressmen called for international inquiries into her death. In their statement after her death, Rachel's parents summed it up succinctly, saying,

Clearly her death was something unfortunate, no matter what one's politics? Right? 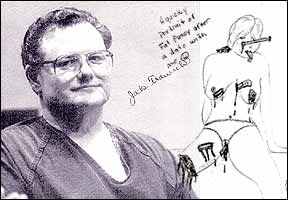 Now let me jump to a different story. Jack Trawick, who you see above, abducted, brutally molested and eventually murdered Stephanie Gach and a number of other women (more). He's absolutely unrepentant (more), still gets off on thinking about it, and has attempted to repeat his crimes even from death row. Because he has the right to free speech, he's been mailing stories to “fans” who then post these online and hold him up as a genius and an artist. His actions are being decried and many states are passing laws to stop him from allowing others to indulge in (and even profit from) his crimes. 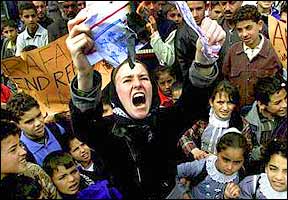 The photo above is of Rachel Corrie (who I just mentioned). Some hateful website awarded her the “Idiotarian of the Year” award (more) for being killed. Along with the award were comments such as the following (the page generated so much positive feedback that after 12 hours and over 1,000 posts the administrator had to turn off the comments):


Lost your mind AND your life thanks to your twisted morals.

Looks like she was kinda channeling Howard Dean-like rage in this picture.

I think Catepillar should accept the award on her behalf, as their products made her Sainthood possible. Also, they should name their new line of heavy duty bulldozers "Corrie Crushers" in honor of St. Pancake.

Rachel Corrie's died in the service of terrorism. She is no different then a suicide bomber. The only good thing about Corrie's death is she didn't kill anyone else going out.

Rot in Hell Ms. Corrie. I hope you like your space next to Satan...

Now, that's not really an enormous surprise. Dumb-ass bigot-ridden web sites are really a dime-a-dozen, and they dominate what's left of the EN-revolution.

But where this story gets really messed up is that when the Wall Street Journal announced it's “best of the web” awards yesterday, they linked to the above site, calling it a “Well-Deserved Award“, and described Rachel Corrie as a “terror advocate“… Wow! You know, even if you think Rachel Corrie was way-wrong in her beliefs, it's another thing to basically spit in the face of human rights and laugh about and make light of her death. I'm really quite surprised it even made it past the editing floor, but maybe that's what the WSJ's readership wants these days?

So I'll avoid talking for now about how more and more Americans are being killed in Iraq, and that it's the bloodiest conflict they've been in since before Vietnam (more). I'll also try and avoid telling you about recent law changes in the US that allow the police to take your DNA without a warrant for violations as light as a traffic stop (more, more).

Now, you all “know” that they're over there to teach the Iraqis a lesson for 9/11, even though they had nothing in particular to do with it. You may remember this little Donald Rumsfeld tid-bit from 2:40 PM on September 11th, 2001:


[Can we] hit S.H. [Saddam Hussein] at same time. Go massive. Sweep it all up. Things related and not.

These days Rumsfeld is saying that there was no plan to invade Iraq until after it was “confirmed” that he had “WMD” (more), but a few days ago Treasury Secretary Paul O'Neill (more) leaked that one of the very first things (it was the top item at the very first Cabinet meeting for example) that Bush did was have plans for an Iraq invasion drawn up, saying, “Go find me a way to do this.”

The Bush administration says that O'Neill is endangering national security (and they don't people talking out of order; more) and may prosecute him for revealing “classified plans” (more), although they don't particularly deny his claims. Since then other officials have come forward to confirm O'Neill's claim that all this hell was pre-planned by the people getting rich from it (more). At what point can we proseucute Bush et al as murderers? I mean, if I started killing tons of people and justified it with “but I need a lot of money”, I doubt it would fly.

Along those same lines, the US Army War College has called the Iraq war “unnecessary” and Bush's plans in general “unrealistic” and “strategically unfocued” (more), and the Pentagon has been caught once again altering its records in order to pass an audit (more) — to hide the money they've been funnelling to the private sector no less!!! Hey, the Bushies have to get rich somehow (more). Well, this is the view out my window this morning (at least that's not so bad): 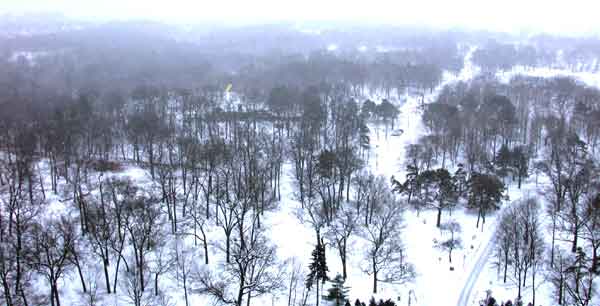 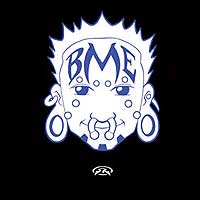 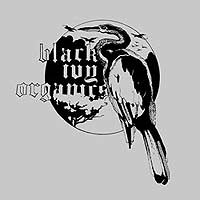 Had a nice long supper with Tom talking about some exciting business plans (some that are now almost ten years in the making!). That said, it didn't take long before talking about advanced mass-manufacture of new jewelry and tools turned into discussing the best way to build a hoverboard using model airplane jet engines, so when I downloaded my notes from my Logitech io (very cool) it contained those diagrams as well.

I don't want to talk about it too much, but there are some exciting new materials available, both for piercings and for implants (I was surprised to find out that in some medical sectors silicone seems to be getting phased out when possible because it breaks down so easily in the body, if not properly cured can absorb lipids and other biomaterial, and is very susceptible to degenerative failures — ack!). Anyway, imagine fully biocompatible jewelry that's rigid when inserted at room temperature, but then becomes totally soft when it warms to body temperature — boom! — you've now got jewelry that even the ADA could endorse for tongues, labrets, and so on.

I love taking cabs (I was lazy and took one home). My driver was a Somalian guy (for those that don't know, Somalia is an African country). Like many cab drivers, he was very well traveled and what he enjoyed most about life was experiencing it in all its varieties around the world. His stories about windshield wiper fluid were pretty funny… “My friends, when they see pictures of me with this white stuff, they think it's paradise but they don't know what hell it is!” He'd never seen snow before coming here, let alone experienced winter, so he was left discovering for the first time in Canada, if it's the middle of winter and it's -40 out, pouring water on your windshield is a very bad idea!

but his talking about Iraq was interesting as well. I'll try and paraphrase (it was slower because he had to find the English words)… “I was working in Iraq three years ago, and it was nice — not like Saudi Arabia — there were go-go bars everywhere, you could buy alcohol, women had good jobs, people went to school, and there were even prostitutes. [Saddam] was bad, but [the US] did the wrong thing in Iraq.”