For those of you who are going to the RI Suscon, I wanted to tease you with the first proofs of the shirts… I really like how they turned out. Photo is by Phil of Brian, and the artwork is prepped by me and produced by Leah-Anne's team over at WePrintGoodShirts.

As a general note, to those of you doing shirts either for events or for your shop, do feel free to drop BMEshop a line about it — they don't just print BME shirts.

People are so gullible.

I get mail like this fairly regularly. You'd think people would put two and two together and realize that the photo is obviously altered. I wonder if they also call in all the tattoo artists who paint tattoos on kids? 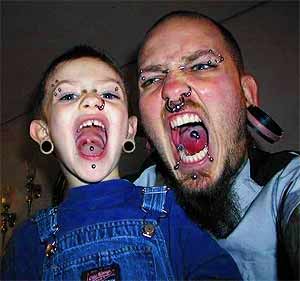 From: Nomen Nescio <nobody@dizum.com>
Comments: This message did not originate from the Sender address above. It was remailed automatically by anonymizing remailer software. Please report problems or inappropriate use to the remailer administrator at <abuse@dizum.com>.

To whom it may concern,

My name is ______and I am writting this email after observing something on a NJ based buisiness website in the city of Brooklawn that disturbed me beyond description and motivated me to seek out contact with this law enforcement agency to urgently re quest investigation into what I consider to be a servere and blatant case of child endangerment and outright abuse! Please be advised that upon viewing the website of Brooklawn based, tattoo and piercing salon, called "Inner soul Body Art"

I immediatley noticed photographs of the owner's {named only as Mark} self described "5 year old son" posing with him in a picture on the main page. I urgently plead with officials in this agency to view the site link above and see for yourselves this photograph of what I can only describe as a horrifying example of abuse and endangerment of a minor child by his self proclaimed Father!

I thank the Brooklawn PD. in advance for investigating this allegation and hopefully securing this childs saftey as well as bringing those responsible for this horrific display of abuse to justice!

Thankyou very much for your attention.

I once was lost, but now am found…

This is for the benefit of Saira.
Warning: If you click that, it's a 16.3 meg audio download. 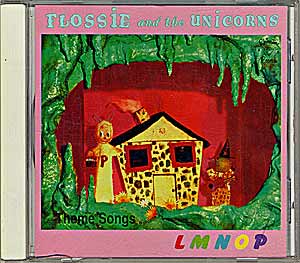 If you want to get this, it's on Skin Graft Records, but according to Flossie herself, it's totally out of print and even she (with all her magic) can't get a copy — so watch out for her travelling puppet show and other performances if you enjoy what you hear here (because the odds of finding this gem used are slim to none, and legally I'm not about to post more than that sample).

I don't think I've posted any apartment pictures yet, and given that it's been nearly a month I think maybe I should. These are still incredibly messy pictures, but I did a little bit of tidying (a lot of stuff is still in boxes) so here's where we live:

L-R: (1) The view as you step in the front door of the living room. On the left (blocked by the kitchen) are a pile of bookshelves and a space that'll eventually become a dining room I think. (2) The living room seen from roughly where a table will probably be soon. (3) My very messy computer room, or at least part of it.

It's no secret that Rachel and I have moved around a lot, sometimes just briefly, but always with an eye open for a more permanent move. Almost ten times in the last couple years that I can think of off the top of my head — Toronto (Bathurst), Miramichi, Toronto (back at Bathurst), Tweed, Tortola, Antigua, Maui, Amsterdam, and now Toronto again — definitely loving it, and definitely appreciate all the people who've pushed me to travel over the past while.

Anyway, I was thinking about where I'd most want to live, and I think the answer is an airship. A little apartment hanging from a large airship that I could travel around the world in — I've been saying “boat” for years, but an airship is the ultimate sailboat. A couple satellite links and I'd still be online and everything, and more and more airports are gaining support for airships as they begin to be taken seriously again as a mode of transport. That said, I have no idea what an airship costs and I suspect they are extremely expensive.

I realize that it generates very little power in comparison to the nuclear plant out in Clarington or the Niagara hydroelectric generating stations, but I really like the wind-generating station that's been put up as a demo down at the CNE. I can see it out of my window (the photo below is off my balcony), and from it I always know what the wind conditions on the lake are like (and good for Rachel too because she can eyeball the wind conditions at the airport now that she's in flight school). 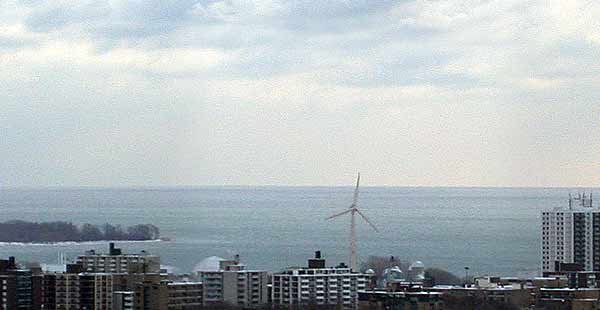