A small (120 story) experience update has been posted. As always thank you to the writers and the review team. I really appreciate your help. If you'd like to join the review team and start deciding what experiences get posted to BME, just click the “HELP IAM” link on the main IAM index.

I know I should haven mentioned this earlier, but I think this it's important to note something about Martin Luther King. We hear a lot about his civil rights contributions and speeches, but you should be asking yourself why the four years leading up to his death are all but censored by the national media (more). To quote FAIR,


National news media have never come to terms with what Martin Luther King Jr. stood for during his final years. In the early 1960s, when King focused his challenge on legalized racial discrimination in the South, most major media were his allies ... but after passage of civil rights acts in 1964 and 1965, King began challenging the nation's fundamental priorities. He maintained that civil rights laws were empty without "human rights" -- including economic rights. For people too poor to eat at a restaurant or afford a decent home, King said, anti-discrimination laws were hollow.

Noting that a majority of Americans below the poverty line were white, King developed a class perspective. He decried the huge income gaps between rich and poor, and called for "radical changes in the structure of our society" to redistribute wealth and power.

"True compassion," King declared, "is more than flinging a coin to a beggar; it comes to see that an edifice which produces beggars needs restructuring."

By 1967, King had also become the country's most prominent opponent of the Vietnam War, and a staunch critic of overall U.S. foreign policy, which he deemed militaristic. In his "Beyond Vietnam" speech delivered at New York's Riverside Church on April 4, 1967 -- a year to the day before he was murdered -- King called the United States "the greatest purveyor of violence in the world today."

In foreign policy, King also offered an economic critique, complaining about "capitalists of the West investing huge sums of money in Asia, Africa and South America, only to take the profits out with no concern for the social betterment of the countries."

You haven't heard the "Beyond Vietnam" speech on network news retrospectives, but national media heard it loud and clear back in 1967 -- and loudly denounced it. Time magazine called it "demagogic slander that sounded like a script for Radio Hanoi." The Washington Post patronized that "King has diminished his usefulness to his cause, his country, his people."

Puts his death into a very different context, doesn't it?

This keeps happening (and I thought they'd see the humor…):

I just walked Leeta, and on the way up the elevator to the 27th floor there was a little French boy and his mother. The boy was really fearful (please, no jokes about cheese eating surrender monkeys), and didn't understand that Leeta was shaking wildly and quivering because she loves kids. He clutched his mother's leg the whole ride up, but to get off he had to walk past Leeta.

As he stepped in front of her she lunged forward (thinking she'd finally get to play with him). I was holding her, so her collar didn't move more than an inch, but the child must have thought she was flying at him. He leaped backwards and smashed his head full force off the side of the elevator — if he'd been facing the other way it would have been enough force to break his nose.

Anyway, I think he's OK, but it sort of sucks because that's the sort of thing that would result in a death sentence if the authorities were called… Seeing as this is a dog-friendly building, my feeling is that if you have a little kid (3 or 4 year old is my guess) that's not comfortable around animals you should probably carry them in this sort of situation, or at least hold their hand…

Just posted another image update similar in size (1,309 pictures) to yesterday's — thanks again to everyone who helped out on it. Tomorrow I'll finish up the dregs of it with a third update so if you haven't gotten a reply on your submission you will then. 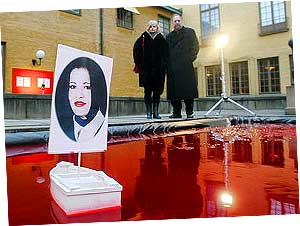 I wanted to mention a weird art story (more) related to the piece above. It's part of an anti-genocide exhibition in Stockholm, Sweden. The piece is called “Snow White”, and features a photo of a suicide bomber in a white boat in a pond of blood. The artist (Jewish himself) said he was trying to show “how incomprehensible it is that a mother-of-two, who is a lawyer no less, can do such a thing [suicide bombing]“.

Obviously, a reasonable piece that's well within the scope of what would be considered normal and even mundane in modern art. Definitely not what most people would consider an obscene or offensive piece in any way, or particularly edgy politically… But here's where the story gets weird.

One of the invited guests at the art opening was the Israeli Ambassador. When he saw the piece he “went berzerk” (the extent of which is debateable) and started tearing out wiring from the museum walls (and this is in front of all the other guests). He then threw a spotlight into the exhibit's fountain taking the exhibit into darkness, and eventually had to be “escorted” out by security. Another guest was assaulted, and musuem workers have been receiving death threats.

Assuming you're not saying to yourself, “jeeez, why doesn't Shannon just get himself a Bible and go stand on a street corner shouting”, maybe you're wondering what you can do to stop the problem below.

While “register to vote”, and becoming an informed and responsible voter is a good start, voting to oust the corporation may not work. They already hold so much power in comparison to us puny humans that if we tried to vote them out of power they'd simply suspend democracy… So re-read the highlighted phrase, and realize we can address that power imbalance in two ways:

So perhaps the answer to this problem is massive-scale genetic engineering of human behings. If we turn ourselves into gods or “superheroes”, then the corporation ceases to have dominion over us… of course… since this isn't going to instantly affect everyone else (or even most people — 98% of people would rather be slaves and safe than free but in peril), we'd face a new battle:

HUMANS VS. THE NEPHILIM