I grew up an hour or so from the next major city, and ten miles from even the next village of about fifty people. In twenty years of living in southern Canada, I've clearly seen the Northern Lights perhaps five times. Tonight, even under city lights, they were glowing brighter than I've ever seen them before. The pictures below were taken about half an hour ago with my digital camera. Other than running “auto levels” to compensate for the low light, these are totally unedited photos: 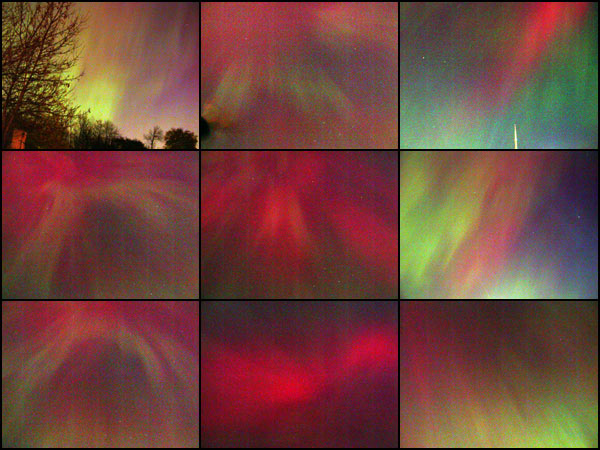 I don't think anyone is safe from the new world order machine… I certainly think that Canada will have to be one of the first to topple if it all goes down. I've been considering more and more that it makes sense to buy land north, rather than east of here.

When Gaviotas, Columbia was formed in 1971, they realized that if they were going to live life the way they felt it should be, they would not only need to define it themselves, but they'd need to define it in a space where they'd be free of government meddling (because of the US's involvment in the Columbian civil war, defoliating the rainforest, leaving land useless for anything but growing coca). In any case, they set themselves up in the Columbian savannah, 16 hours from the nearest city (and over the mountains!). It wasn't easy, but they did it, and more importantly, no one stopped them.

There aren't many desolate parts of the world left to migrate to. Here options include the Northwest Territories, the Yukon, and Nunavut. I'm absolutley infatuated with Nunavut. When I was growing up, my next door neighbor was Blackfoot and did the sundance ritual with them — I'm sure that seeing those scars as a young boy had a profound effect on my life. He also spoke the language, which seems fairly similar to the Inuit Inuktitut language.

In preparation, I've been starting to teach myself Inuktitut over the past few weeks. It's hard though — the language is so beautiful and so logical at the same time that I find myself constantly on the verge of tears as I study. In English, German, Hebrew, French, Latin, Spanish, and every other language that I speak a little of, the grammar is constructed sequentially. That is, a string of words is created, and by reading along them, meaning is found. Inuktitut though builds “concepts” as much as sentances, by tying together subconcepts.

For example, in English you would say “I am happy to be here”. Each “piece” is a little word that stands on its own, and when sequentially processed gives you your meaning. In Inuktitut you would say, “quviasuktunga tamaaniinnama” which is five concepts (happy, I here, in, be, and because I) joined together. Or let's take just a single word — in English we would say computer, but in Inuktitut you'd say “qarasaujaq” (literally, “something that works like a brain”). It's one of the few languages that has not adopted modern English words.

Sorry that explanation sucked so badly, it's not easy to explain until you've tried it.

Most local community colleges have courses on Native languages. Don't underestimate how much your world view can change when you try and explain it using someone else's words.

A short while ago I got a call from a writer friend of mine that lives in New York, terrified that the US government was going to “disappear” him. He's been writing articles suggesting that all of these current horrors are simply a cover for a military coup of the United States. Over the past couple of days it's becoming clear that perhaps he was right.

As everyone knows by now, Bush was not legally elected. That was the first step — they've shown that the American population is perfectly willing to rally around a president that they didn't even elect. Now they're doing step two, and dissolving the democratic process altogether and converting the US to a military run police state. Be vigilant, do not let this happen!

They've readied Fort McNair for Congress's relocation. They've been detaining legitimate US politicians who have anti-war politics. They have convicted US students for supporting anti-war causes because they say it disrupts the education process. They have formed the terrifying Homeland Security agency, and now have extended the “terror alert indefinitely“. Insane new government secrecy laws are being instituted. They are refusing US media access to war information (remember the quote: “Tell them nothing till it's over, and then tell them who won“). If you really want to be shocked, watch some non-US TV for a while, and you'll see that what gets shown on CNN dramatically leaves out most of the story. (PS. That's a link to the NY Times, a membership form will pop up — it's free to register).

I'm totally unimpressed by the FBI's handling of the Anthrax case, especially its public appeals for help. The FBI has offered a one million dollar reward, and has asked people to compare handwriting on letters they get (remember the messed up Anthrax letters written in block letters?). I love the fact that the government is actually blaming the public for this — the Mayor of Balitmore said, “The FBI have 7,000 people on the job. We've got 650,000 if only they would call.” (Yeah, all those people are just hiding the information).

Even though the US population as a whole doesn't seem to know what's going on because of tight controls on media and education, this is turning the US into not only the world's most hated country, but is giving it an air of incompetence internationally. Read the international papers. I'm not talking about fringe papers, I'm talking about the mainstream papers from around the world, and you'll see a barage of stories talking about how America is losing this war badly and how no one should ever go to America if they carry a non-US passport. Endless stories about the bombing of non-military villages and idiotic “defense” plans aren't helping.

PPS. Any time you're looking for that link to look at experiences, it's the one on the main index labelled “Work”.

PPPS. If you ever want to prove to anyone how helpful you have been, you can make a link like this on your page:
https://www.molokosynthemesc.com/exp.exe?cmd=verify&username=glider
Of course you'd put your own name instead of “glider”.

Back to the mines (as in work)

Just got back from my morning business. I noticed something strane when I was picking up the TT. On the dealership's counter, they had copies of the warranties for VW and Audi. They were word-for-word identical with one difference. In the VW warranty, purchasers were referred to as customers. In the Audi warranty, they were referred to as clients. Do rich people prefer that word?

Then I went and got my tires (for you tire nerds, a full set of Pirelli Snowsports, and a set of Toyo T1-S for the summer). More excitingly though, a friend of mine that owns an offroad custom shop up there was repairing a Lamborghini LM002 owned by a Saudi Prince (Note to CIA/FBI agents reading this page: please do not arrest me for my second-hand contact with the enemy, I don't know anything about him).

As I mentioned a while back, I usually listen to classic rock radio when I'm in the car. They play stuff like Dylan, the Beatles, Steppenwolf, CCR, etc…. At the same time, the DJ's spout right-wing pro-war uneducated drivel. I find it strange that they do not see the conflict between the nonsense they're saying and the profoundly anti-war music they play. A few weeks ago I was speaking to one of the DJs from this station (I probably shouldn't name him), and he told me that it wasn't about what he believed. He had a job to do, and his job was to sell advertising — if he spoke what he really felt about the war, the station would lose those advertisors, and ultimately, that's what it's all abourt. Who cares that bombers just took out a dam, resulting in probably hundreds of thousands of deaths this winter… all that matters is Pepsi.

And now it's back to work with me!

PS. They published my letter! When she hits that high note, I get a boner the size of Florida!

Jason's is way too funny! 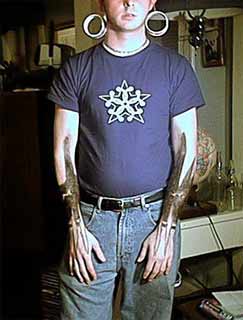