This was brought to my attention by Bryan. A couple years ago BME ran a best brand design contest which he won. (Yes, I know it's not a contest). After working with Blair, they actually settled on a different design with equal amounts of personal meaning. The photo on the left is his leg cutting. 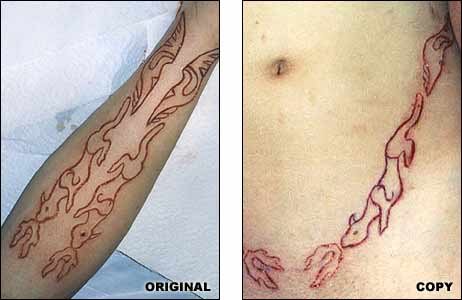 On the right is a photo that surfaced recently — I don't know if the artist stole it or it was the client, but I can't even begin to say how uncool that is. I'd have thought for something as intense as a cutting that the person would have enough respect for themselves to not try and steal someone else's soul!

I think the pumpkins, which have been bravely guarding the back yard, are not doing so well… Only a few are even left:

PS. Did y'all get to see hydr0chl0ric on the cover of BME? Those are some damn cool nostril piercings he's got — I wish more people would stretch those piercings.

So the CD went to press yesterday. 1000 copies should be in my hands on November 29th or something like that, and they'll be in BMEshop just in time for Christmas. They'll be priced somewhere between $9.99 and $14.99 and 500 will be available to the public (the rest go to the artists and to radio stations).

Many of you emailed me about various errors — the typographical and grammar/spelling errors have been fixed, and Phil's missing photo credit was added.

I have two quickie links:

I just got this instant message, and just got a second similar one:

>hey shannon :) i just heard on CFNY you'll be on the morning
>show tomorrow, or least they're trying to get you on hehe.
>that should be interesting

Now, I think most of you know I have a “medical condition where I am unable to form new memories” (not quite that extreme), so it's quite possible I do have some appearance I was supposed to do, but I'm almost entirely sure I don't know anything about this.
Comments (0)

I'm working on other things today — among other stuff, the CD is now with the manufacturer… So anyway, I'm just going to pass a few quick links that I think are worth checking out:

I've been working on the graphics for the IAM CD this afternoon. The audio is being prepped this evening as well (nothing too exciting, mostly just making sure the levels are roughly the same from track to track). Deadlines are past, so it goes to press tomorrow. Here are some thumbnails for those that are interested: