Because the temperature just dropped and the first snow storm of the year happened today we rushed the balcony plants into the house, making this place even more insanely cluttered than usual. It’s not that it’s dirty or anything — I do the dishes and all that — but there are always so many projects on the go that it’s a literal maze of wonders. I think even if I had an aircraft hanger-sized space to work in I could very quickly fill it up. I hope to have a little more time to work on it this weekend but I’ve started filling in the background on Cold Water Extraction (which really needs a less mundane title I think) and am opting for a bright and garish theme. 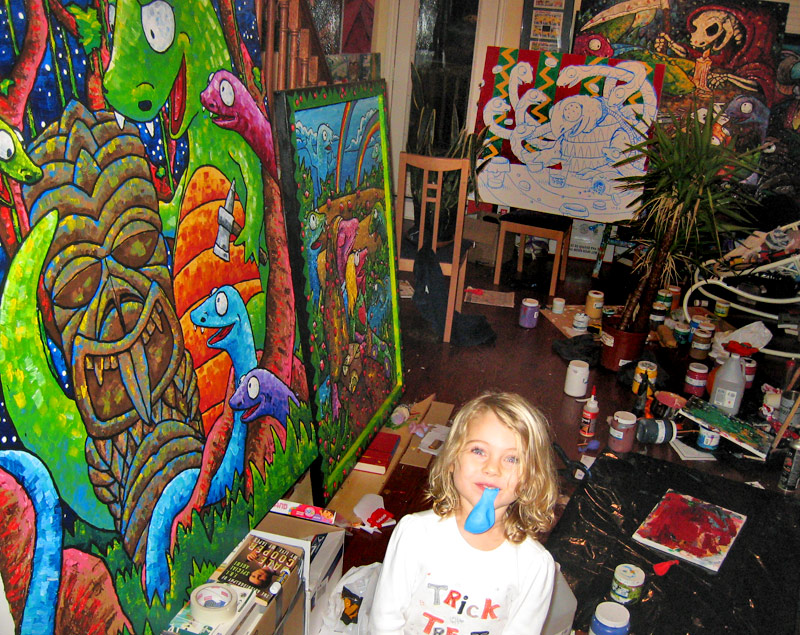 I’ll also mention that The Toronto Winter Swim Club is back in action for it’s second season. We went yesterday and it was wonderful, and will be swimming again on Saturday November 24th at 2PM 6:30PM at Cherry Beach. Anyone who’d like to join us is very welcome. It’s enormous fun. To paraphrase the Russian philosopher Porphiri Ivanov, I agree that the main reason that humans live in a constant state of sickness, both mentally and physically, is that we wall ourselves off from that which keeps us healthy. By living in exile in isolated and controlled environments, away from nature in unhealthy little cocoons, we are unable to exist as functional members of the larger ecosystem of which we are intended to be a part, and can not face our role in the universe. Winter swimming is an excellent first step in immersing oneself in the reality of being truly alive. 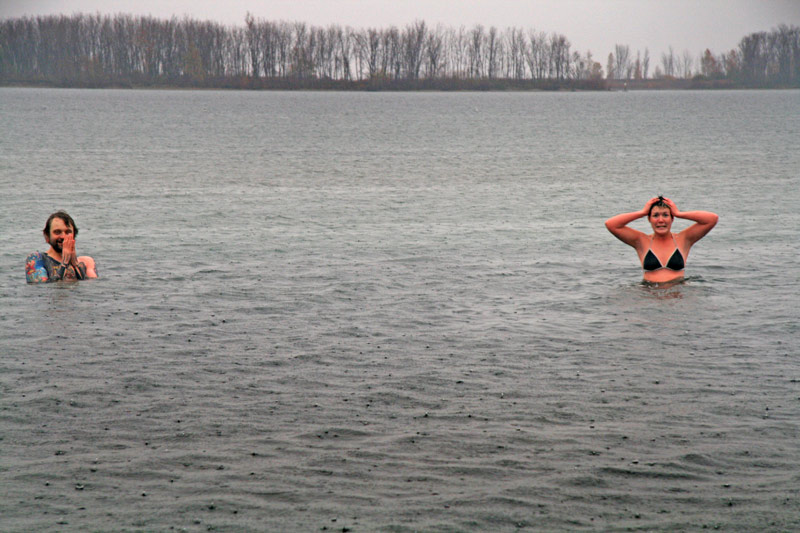 I think the theme of my latest paintings is “things I’ve been accused of” or something like that… I bought some new canvases today — this is being done in 42″x48″. I also got a 54″x42″ which isn’t committed to anything yet, and a couple smaller ones as well that I’ll do stuff with Nefarious on. I’m not sure yet what colors I’m going to do this painting in… on one hand I want to go bright and psychedelic, but on the other hand I want to stay true to the feeling of the kind of high you’d get from an opiate extraction and stick with mellow, warm tones. In any case, that’s my next large piece. As I write this it’s still for sale. 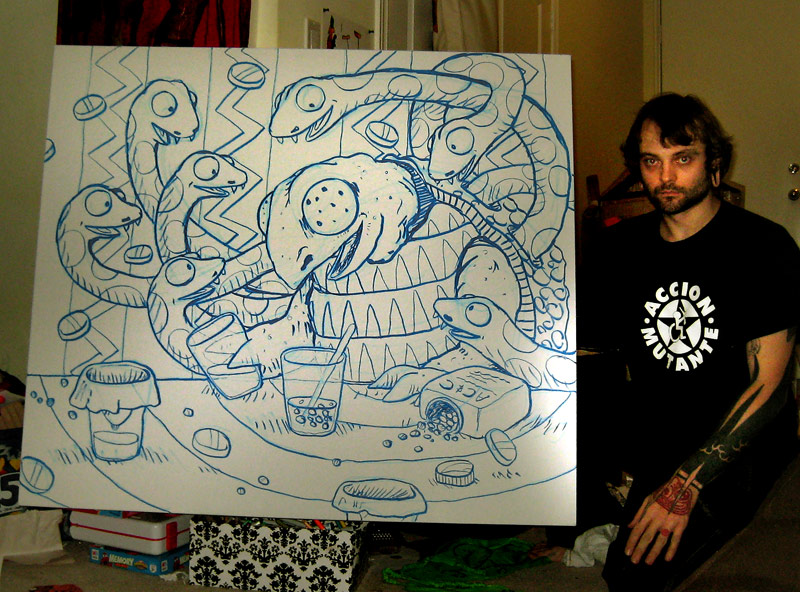 This is a collaboration with my daughter Nefarious: 24″x48″ acrylic on canvas. 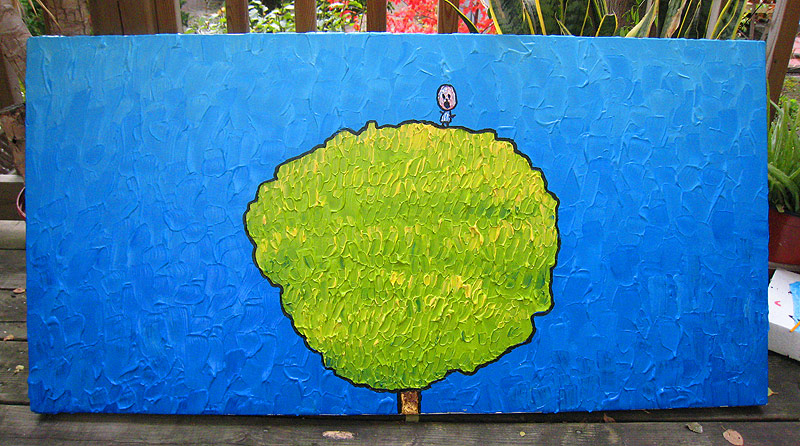 An allegation that I was abusing prescription opiates was made a while back, and I took a hair test to — successfully — prove that this was not the case. Getting a hair test done is actually really upsetting — perhaps doubly so when you know you’re innocent — because it’s a physical violation as much as just an emotional violation. Anyway, turtles don’t have hair, and I don’t really know what the mechanics of a “shell test” are, so I’m going to assume my testudine friend here bending the rules need not worry too much about his future job prospects. 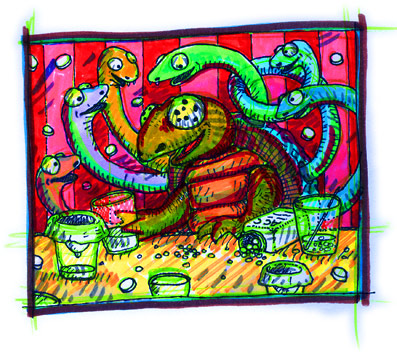 I’m not sure if I’m going to paint a version of this or not. It’s really just a doodle… Tomorrow I’m going to finish off a painting that my daughter sketched out — a little fellow sitting on the top of a sole tree in an empty plain. It’s quite serene — and lonely — but a wonderfully structured piece of art either way.

Earlier today Caitlin and I were looking at this amazing “natural bathtub” carved out of an immense boulder. It got us wondering — what if we got a bunch of boulders dumped on our foundation, and then built the walls around them, and carved much of our furniture out of immense stones? I mean, there’s really no reason why you couldn’t care out a couch and coffee table if you wanted to — other than the inconvenience of your furniture weighing an unmovable ton or two, it would be wonderful caveman chic, to say nothing of the thermal mass it would contribute (water in that tub would stay warm for days if the stone was at temperature).

Oh, and my daughter and I built a little tiny frame, which still needs to be painted, for one of her miniature doodle paintings (a striped unicorn-type being and a dragon climbing)… 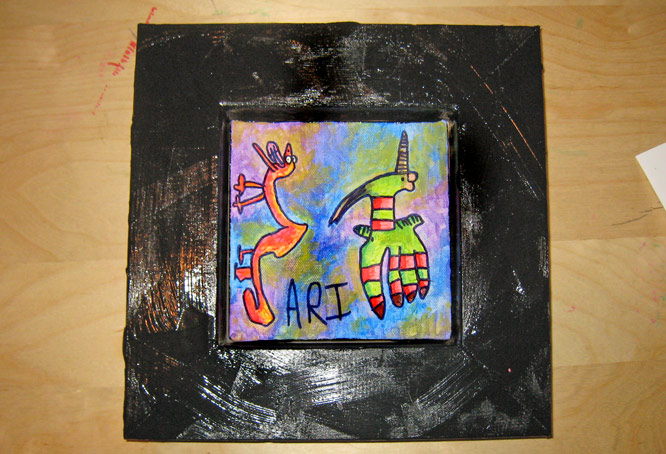