You know, all of these stories that “Iran could have a nuke in a couple months” are constantly decried as “fear mongering“. I mean, we know that Iran has all of the specific weapons research done for them since Pakistan put the hard data on the market, to say nothing of the public domain information already out there, as well as most of the precursor materials and technology required. We also know that the US managed to build a bomb from scratch, quite quickly, without computers or most of the technology we have today in a few years during WWII…

Now, I'm not saying I believe Iran is building a nuclear bomb (although they easily could be it would still surprise me), but it's incredibly insulting to Iranians to suggest that they're incapable of doing it quite quickly given what they already have… If they have the money to throw at the project (money and resources is the main reason that the US beat the USSR, Germany, and Canada/Britain to the bomb), I'm sure they could do it.

The bigger question to me is their delivery systems… Personally I'm pretty dubious that they could even build a missile that could hit Europe let alone America. A low tech delivery (passenger jet) is much more likely though… No reason why you can't use a 747 as a bomber.

Wow, the story about a well known Republican's father's genital piercings looks like it's about to blow up and be a moment of hilarity in the mainstream news! I have my fingers crossed that it gets a mention on The Daily Show or something because I would be tickled pink, whether there's a BME reference or not (I sure hope so, but I doubt there would be). Anyway, check it out if you haven't already — it's a rather touching story about a person who helped create the modern piercing scene, and an interesting anecdote about how influential people raise other influential people…

The show tonight was a lot of fun, and Nefarious was incredibly well behaved and enjoyed it even though we didn't make it home until 11 PM! I definitely recommend going to see The Shoebox Tour — upcoming dates this week include Montreal, NYC, Boston, Philly, Pittsburgh, Toledo, and Louisville. You won't regret it…

I really have to emphasize that this video sucks and does not do the show justice at all. The Shoebox Tour not only included incredibly creative juggling and related arts, but had a live theremin (and other weird instrument) soundtrack backing, and more. Very cool, and thanks to Phil for suggesting it.
Comments (0)

So I picked up some fish tonight and was going to try and do a knockoff of the fish tacos at one of the beachfront restaurants in La Paz where Nefarious and I and everyone else used to live in Mexico, but I discovered that somehow all of my Magi sauce (I think that's their key “secret ingredient”) has gone missing, which sucks, because I don't think I've even used it once. I don't know really know how that's possible. So I faked it with a mix of soy sauce, cranberry juice, lime, garlic, dry sweet pepper, and chipotle pepper… It still turned out very nicely but it wasn't what I was hoping for.

You know, seriously, if you ever want to fuck with someone's head, go into their house and steal full containers of sauce. Grr. It really bugs me…

Anyway, in the great news department, the traction belts for my carving tool came in the mail today, so depending on how much time I have tomorrow, I'm going to install them and do my first picture frames tomorrow (I just spent a while drawing prototypes in the CAD/CAM software), first for a painting that I did for my brother's birthday that's desperately in need of delivery since his birthday was back in April.

My neighbors are blasting their stupid dance music again, as they have for the past five hours now. I am going to try and sleep but I have a really low tolerance for irritation… Especially when I'm missing sauces.

So, I had surgery on the first of August, after which I was given four days worth of painkillers. My follow-up appointment was originally supposed to be on the ninth, which was four days after my release date. It has now been pushed back to the seventeenth, and with a different doctor. It's pretty lucky that I distrust the medical system in general, so I've been spacing out my painkillers as much as possible, and doubly good that I'm very healthy, so I'm healing well anyway. I walked about a kilometer and a half today, as well as having done a ton of work… but I am kind of pissed off that I'm going definitely going to be doing this in a lot more pain than I'd like. Like I said, for me, it's not really that big a deal because I'm quite healthy and ultimately I can take a lot of pain, but if I was sicker or wimpier this would be far less bearable.

That said, if I bump into anyone who's selling oxy or percs or anything like that, I'm highly likely to be in a purchasing mood because as much as I can handle being in pain, I definitely prefer not to be…

In any case, I marinated my remaining breast of chicken in the juice of one fresh orange for most of the day, along with a little lime and chives and garlic. I cooked the breast whole and then sliced it and tossed it in at the end with assorted vegetables and served it on a bed of couscous with almost and assorted fresh sprouts with a light lime dressing on the sprouts. It was alright but nothing special… 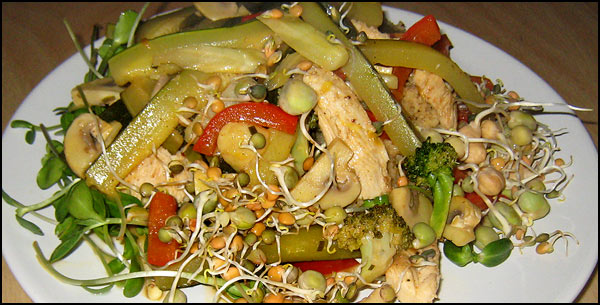 Nefarious is back tomorrow from visiting her cousins so I'm thinking about making fresh pasta with her because I've never done that before and it seems really easy. Anyway, I'm really tired and sore so I'm shutting off my computer… but it's good to have gotten all this work done.

Lots and lots of walking!

Whew! I am soooo tired! I literally walked about 10km today. It's amazing that I just had that big leg surgery less than two weeks ago. The biopsy put me out of commission solidly for a month. This surgery? A couple of days. That said, the problem with it healing so quickly is now the allodynia is back, and back fairly intensely, but I have an appointment on Wednesday to get myself started on gabapentin in the hopes that will control the pain, and to get a referral to a pain specialist. On Friday I'm off to the fracture clinic as well for a check-up. I guess it'll just be to take out the staples and so on.

All-in-all my healing from this procedure has been exceptional and I'm very happy with everything except for the nerve damage complications from the biopsy, but that's old news.

An assortment of things I've cooked in the last 36 hours: 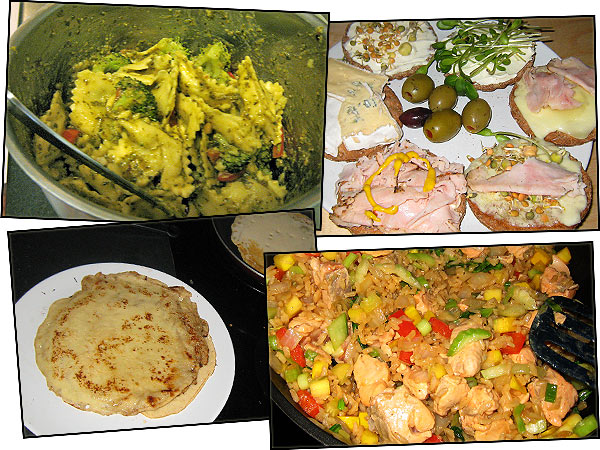 A yummy tray of assorted crackers, cinnamon-vanilla crepes (served with jam and strawberries in this case), an awesome veggie and pesto ravioli, and a light salmon and brown rice stir-fry with a lime-soy dressing. One really nice thing about Nefarious being back is it means that I cook constantly… I don't really tend to cook much unless I'm making stuff for others.

We went to the CN tower today, which is why I walked so far. Not having a functional car at present is probably a lot of the reason I'm healing so well — all the light exercise! 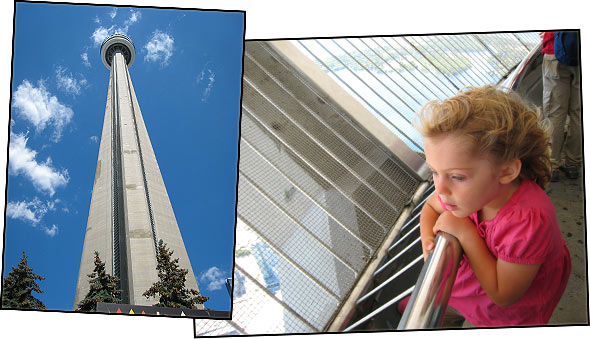 The latest amputation post on ModBlog created another (hopefully productive) furor. I'm putting the final stages on a really nice interview with one of the mid-foot amputation folks that was recently posted, so watch for that to go up in the next week or two.

And now, off to bed. Seriously!