Thanks to Gone for letting me know that BME (including Rachel being credited as the most hardcore modder out there for her eyeball implant) was featured on MobuzzTV again (geek tattoos was the previous feature).

Click through if you're interested; it's a short segment that begins about at about two thirds in. 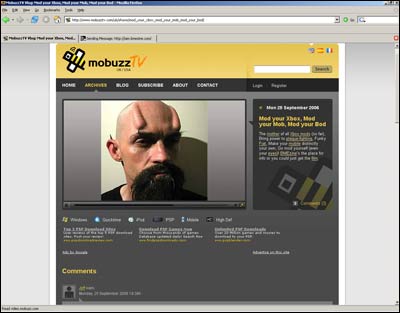 I'm combining this car and gym entry because I figure they're part of the same fetish.

So I've been going to the gym now for about a month. My schedule is already very full, so it's only three times a week for an hour, but even from just that I feel dramatically better, and I think in relative terms (as in relative to very-out-of-shape-Shannon, rather than, say, relative to Kilean who's currently cutting down for his next MMA fight) I'm seeing nice changes. That said, I'm still pretty soft and flabby everywhere, ha… But small steps still get you where you're going, you know. My general plan for 2006 was healing and getting myself put back together, and I feel like I'm slowly achieving that. I certainly feel better now than I did ten years ago.

One of the things I like most of all about going to the gym is mind-body connectivity. I know that everything I'm saying is old hat to most people reading this (certainly the average BME contributor is far fitter), but I really was (and still am) in attrocious physical condition. But anyway, I really like feeling things hurt that I didn't even know I had, and slowly learning to isolate those muscles and control them. It's kind of amazing how “disconnected” we can be mentally from our bodies. It's my hope that by really understanding how to physically control my body that I gain much more control over tremors and seizures as well.

It's also funny to me which parts of my body are messed up (inflexible, weak, and so on), and which ones aren't. I have a bad ankle on my right side (and always have), which has made me favor my left side, so in some areas my flexibility and strength is almost non-existant on that side (so for example, it's very difficult to coordinate a squat), but at the same time, I have weird flexibility in my upper legs from (I suspect) years and years of judo when I was younger.

Anyway, I've been having a great time, and I'll repeat something I've said before: The worse shape you're in, the nicer you get treated by everyone at the gym. Which is good, because I'm in pretty bad shape as you can see from the picture. That said, the terrible tattoo distracts from what terrible shape I'm in… I'll also warn people reading this that are younger than me (until Friday I'm 32) not to wait, because like investing money, the earlier you start the more you're going to appreciate it as you age.

Other than that, my request for the “NATA2″ (ie. “SATAN” in the mirror) license plate got turned down (no suprise there). That's OK though because I've decided to go with a completely different look on the 997 anyway… I'm going to chat with some of the people who do SM gear about doing up the interior of the car in canvas and rubber, with restraint straps on the seats and everything… Should be fun, and who knows, maybe I can do it on trade because it would be great promotion for them as well… And later this week I should have the “family truck” back ('87 Jeep Cherokee or some year like that). I've put a little more aggressive tires on it (still 33″ though; I've already lifted it 5″), all of the rusted bodywork has been torn off and rebuilt, and it's getting painted satin black with dark camo over that. In addition it's now got very aggressive fender flares (so I can legally run it in the winter), new front and rear bumpers, and an 8000lb winch.

I'm slowly building it to show condition (as well as being a great functional trail and offroad vehicle, while still being a solid daily driver)… Other than a snorkel and maybe some more lights and a roof rack the exterior is largely complete, so next (probably in the spring when I've saved up enough to do it) the interior gets tackled, which will mean tearing everything out (replacing the carpets with truck bed liner), putting in a roll cage, and other finishing touches…

Oh yeah and I cut my hair off again.

I stayed up way too late last night (great UFC event, one of the best in a while)… I'm barely awake right now I think. I'm definitely making it an early night today. Anyway, let me share some photos from the last day very quickly.

“Community Vehicular Reclamation Project” by the streets are for people group.

At dinner with Phil, Marcel, Jaques (who's currently learning English but was still very nice company), and Skip who took the picture.

Above are various pictures of mushrooms on the walk to the park from my house. They're everywhere right now because of the weather. If the ground and air were cleaner they'd be edible (and there were lots of tasty but polluted looking puffballs). None were magic. And in the picture on the right is Luke (the boy with the blonde hair) playing with Nefarious (they met at the park).

Oh yeah, and because I'm a “try anything (at least) once” guy, I had horse for supper last night. I didn't even know it was served in Toronto until recently (we ate at La Palette; we were going to eat at Batifole but they were full), and didn't know that this was one of the places that did until Phil mentioned it. I eat so little meat like this that honestly, if I'd been told it was beef, I wouldn't have been able to tell the difference. The grill came with (in my case anyway) wild boar and caribou as well. The wild boar just tasted like pork, but the caribou was great.

Anyway… I'm going to try and do a little more editing on the new book. I've moved all the interviews to this computer so that I can slip in work on them whenever I can squeeze in a spare moment.

Any eye doctors reading this?

So I have three major modifications that I've been wanting consistently for five years or more (which I think for modifications so extreme is a reasonable period of time to think about it) but haven't got around to doing yet. You can see two of them in this (not very well mocked up, just woke up) photo. 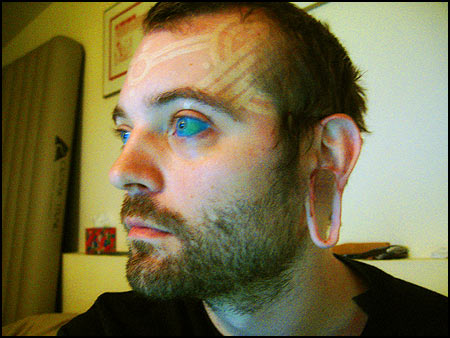 First I want to colour the whites of my eyes a blue-green colour to match my irises, completely covering the white. All of my research in both the popular press that documented it when it was popular in the past, and the medical literature (because tattooing can be done to correct defects in the eye) suggests it's safe. I've even had doctors tell me they believe it's safe. Now it's a matter of finding one willing to take on the liability issues and try it. So if you're an eye doctor reading this, and would be willing to try it, I'm willing to travel anywhere in the world to have this done. Please contact me!

The second visible modification that I've wanted for a long, long time is the removal of my anti-tragus and part of the inner conch. I don't wear jewelry in my lobes anyway (I don't think it would be comfortable to wear jewelry after such a cut), and I prefer the look… I have no idea if anyone else on this continent agrees, but to me a removed anti-tragus and big lobes looks very “distinguished” and feels right as I age.

I just went for a brief walk down the railroad tracks and I noticed some sunflowers up between the tracks. A woman who was walking from the other direction seemed to notice them as well and reached them before me. I saw her fiddling with them — for a moment I thought she might be foraging, but I didn't think that would be healthy. I watched her picking up the flowers, but couldn't really tell what she was doing…

I walked over and commented how nice the flowers were, and asked her if she knew if they were wild or if she'd planted them. She didn't know, but said she was going to help them spread, and showed me the handful of sunflower seeds she'd been picking. Then she walked on down the tracks, leaving a trail of next summer's flowers behind her. 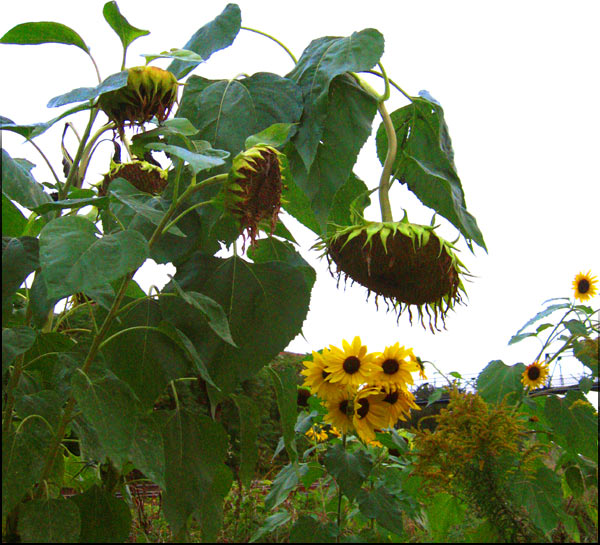