It's not much of a secret why the US got involved with the Iraq war — to make a lot of money for the people who put Bush into power. That much is obvious and has been the reason that the upper class has been involved in nearly every war, which has made them continually richer while stealing both the lives and the assets of those below them. Let me emphasize: A LOT OF MONEY!!! If you are an American, that half a trillion dollars you spent last year on war came out of your taxes and went into the pockets of the wealthy. Let's look at some basic facts:

So war isn't needed for anything other than a very specific type of corporate profit. When these corporate profits are high, tax revenue moves from the lower and middle classes to the upper classes who are in league with these corporate engines. War is ignorant and useless unless you're very rich and are positioned to siphon money with it.

However, to trick the lower classes into supporting war (which never helped them in any way), they use a combination of propaganda (no offense to country hicks, but how more obvious can the propaganda be) and (somewhat manipulated) real events such as WMD scares, various attacks around the world (oops, forgot to get some of the operatives out first), and so on.

To get into Iraq, WMD claims as well as the after-shock of 9/11 were used to trick the American people into supporting it. Sometimes it's easiest to guess who's behind something by playing the who had the most to gain game. We know that money motivated the core players, but others in the region had life and land to lose and gain… Some people have said Israel, but in hindsight I don't think so.

Israel had nothing to gain from the death of an Arab state that was pushing secularism (or I'll say less to gain than other players), and given the less-than-ideal results, has actually lost a great deal in this mess. Iran on the other hand was directly threatened by Iraq… “lucky” for them Iraq's secular government has been destroyed and is well on its way to being replaced by an Islamist one.

Now, we know two things about Chalabi, the man who provided the Bush Cabal with most of the intelligence used to get into this war in the first place:

So to be clear. If the above statements do continue to prove true, there is a very large circumstantial case that Chalabi is an Iranian intelligence agent, and that Iran used false intelligence and manipulation to trick the United States into attacking Iraq for them. But even though all of the pieces are public news and not being disputed, I doubt you'll see much more about that story. Not that Chalabi has been replaced by anyone more trustworthy.

So on to torture. Returned soldiers are telling their stories, and report after report is coming out: Rumsfeld specifically OK'd torture of Lindh (more), Bush overruled Pentagon lawyers and personally insisted on torture being done (more), and that the Pentagon gave long lists of how to on torture including murder (more). There is effectively no doubt that torture is and was official US policy and that the torturers at Abu Ghraib were being told that they were working directly for the White House.

Good news for the money makers though… Thanks to Bush, terrorism is way up, ensuring that even if he is thrown out of power this November, the money keeps rolling in as Kerry plays the highly profitable clean-up game. The money is already in the bank… Brings a whole new meaning to that banner, doesn't it?

Rachel and I met with their Canadian rep/distributor to check out Studex's System 75… it's their latest gun which attempts to address the majority of the contamination issues, as well as being able to pierce in up to 14ga and 12ga using everything from traditional butterfly studs to threaded curved barbells in titanium. We also saw their other tools including their jewelry line, stretching kits, and so on, but my focus will probably be the System 75:

It was largely what we expected; a system that probably works (on the basics anyway) 90% as well as the average piercer 90% of the time. Or something like that. I have a ton of samples, including stuff that's not for sale in the United States yet… so… if anyone in Toronto wants to volunteer to be a guinea pig for a navel piercing and basic nose and ear work, drop a line to Rachel please.


Update: We have everyone we need for this experiment. Thanks to all the volunteers!

The full article will probably come out in about two weeks — I'm waiting for their lawyer to provide studies disproving (or not) some of the complaints people have with guns, as well as waiting for their new pricing for these devices to be finalized. To be very clear, my goal is not to promote, recommend, or shred these tools. I just want to give an objective take on what they are, how they work, and, then from a subjective point of view, give my take on what we should do with them if anything.

How America can win it all

I'm really sorry that I can't remember who it was, but a friend of mine here bought an Invader GT if I remember right… It's sort of a funny looking car, so I wanted to post a picture of one that another friend with one just sent me, having recently completed his restoration and modification. So don't despair if you're thinking “what the hell am I going to do with this stupid looking thing!” 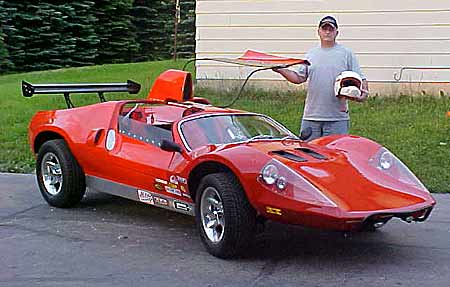 To hell with war.

Read it now and you'll see what a bunch of unable-to-learn dimwits we are.
Comments (0)