I was going to write on other issues, including the potential overruling of Miranda laws (a case worth keeping a close eye on as if the government makes their case it both eliminates the “right to remain silent” and opens the door to much more severe interrogation techniques), but I'd like to talk primarily about the US pull out of Karzai security.

Hamid Karzai is the drug warlord put into power by the US to rule Afghanistan to ensure the US oil pipeline deals would be signed. Now that that is complete, the US is pulling its forces out — and Karzai, who's already survived one assassination attempt still needs military guards of course. To replace the US military, private contractor DynCorp has been hired.

First, please read and understand what I've written about emergent behaviour in large corporations. Then look at the damage a “benign” company can produce. Then realize that this is a very high-end mercenary company (it's called in when conditions are considered too dangerous for US special forces) that has also been caught up in scandals ranging from the financial to running rape rings in Bosnia (where they'd been contracted to run policing), shooting down the wrong places (remember the missionary they shot down in Peru?), drug smuggling, and so on. Oh, and they were significant contributors to the Bush campaign of course.

You've seen what companies start demanding when they get powerful (RIAA/MPAA are of course examples that you know well). You've seen that they act without any kind of ethical constraints or concerns for the public. You know this is a company comfortable with trading human life for money. You must realize what's going to happen when they are contracted to do domestic security and policing — and don't think that's not going to happen. I've linked a dozen articles in the last six months showing the percentage increase in private contract to public forces.

I'd recently lent someone the book “101 Things To Do 'Til The Revolution” (a US libertarian and constitutionalist type book). After reading me, she asked me, “I really liked the book, and I thought it was good advice, but the book never really talked about the revolution.”

That's because those writers don't know what the revolution is going to be. There's a revolution going on right now — these large companies (like the one above) are trying to overthrow the government. When that revolution is over, things get very scary. Republican fools are voting to make it happen under the sad delusion that they're making small responsible government and a land of liberty. They're not. They're removing the last defences the public has against these monsters.

PS. The scrapbook turned out totally awesome. I think everyone who ordered one is definitely going to be very happy with it… And I think there's a real good chance people are going to wear them out!

These photos of it really suck, but the scrapbook looks awesome… I mean really amazing! Everyone will DEFINITELY be very happy with it. The softcovers ship tomorrow and then after that off with the hardcovers.

The upload is in place… Enjoy!

Anyway, I hate posting such a tiny entry, so I'll quickly write a mini-essay to fill the space (hey, writing is good exercise for my brain). Since we've been talking about companies, and a few people have been saying, “but Shannon, how can you argue for personal freedom but then want to limit the actions of companies?”, I present Emergent Behaviour In Corporate Systems:


Emergent behaviour is the name for the phenomena of "the whole is greater than the sum of its parts." It is the result of the interaction of small simple systems bringing forth complex behaviour (without any of the small systems even being aware of the larger picture). Examples include a collection of neurons forming a conscious brain, swarming and insect behaviour in general, as well as some self-organising networks designed by people.

A small company -- a company in its youth -- is owned by one or more people who have direct involvement either personally or by direct proxy via employees. The actions of the corporation at this size, while intended to ensure that corporation's survival, are directly governed by the ethics and human instincts of the directors.

If time goes by, and the company is successful, the ownership shifts to where the company is owned not by people or even people by direct proxy, but to a place where the company is owned by a combination of other companies and shareholders (many of who own the shares anonymously through large portfolios). After enough time, none of the original owners are involved on any level. In addition, the corporation is able to grow large enough that no single individual or even group of individuals has direct involvement in all aspects of the business including consumption of the end product.

At this point, each piece of the company keeps doing its job, but it's grown large enough that each piece does this job without real awareness of what it means on a human level or what the other pieces are doing -- emergent behaviour has brought the company to a point where it is a "headless monster" fighting for its success and survival, but without any human restraints (ie. ethics). These entities fight for survival with more power than most small nations, but with no more "care" for humans than a virus has (and the spread of disease is also a good example of emergent behaviour; highly complex strategies can be exhibited by ridiculously simple creatures).

By protecting the "rights" of these headless monsters, we are not protecting our human rights or freedoms as the government would have you believe. We are making a choice -- we are choosing these constructs, these masterless golems* over humans. They don't value freedom or human life. They don't even "know" what it is.

The point is, a large system can and will act amorally and in direct opposition to the best interests of the public (including the shareholders) even if every small part of that system acts in a moral and responsible manner. But you're probably bored now… Enjoy the update

* I mean that in the Jewish sense of the word, not the Tolkein sense!!!
Comments (0)

You think governments work for the people? You think they couldn't possibly care more about big business than you? I'm sure a lot of people have already seen this link because it was on Fark earlier, but here's the gist of it (full link):


World Heath Organization [WHO]: Our studies are clear that cola and soda pop is unhealthy and excess consumption can lead to obesity.

Coca-Cola and PepsiCo (to Bush administration): Here's a few million dollars to help all your good work.

US Department of Health and Human Services (to WHO): Why that's preposterous! There is no evidence linking high sugar intake and obesity! We support Pepsi and Coca-Cola in their push to make sure that school children have the right to not just drink pop with lunch, but also during class*. The American People: Good to know, we'll keep drinking this liquid candy! That's why we're so thin and athletic!

300,000** people died in America in 2000 from obesity related causes. It's worth taking seriously that the government is not just willing to ignore these issues, but to actively fight to make them worse when paid to. Realize something: this is not a government for the People, by the People. This is a mercenary force that has taken over the White House that has made it clear over and over that they work for the highest bidder, no matter what the outcome is.

Rachel (paintball maniac) and Rob just headed in to Belleville to pick up a gun for Rob and for Jon (Rachel and I already have some)… So yes, if you come to the New Years BBQ the following events are planned for inclusion:

I still want to try and see if I can find an outdoor hottub to rent… That would be a lot of fun. 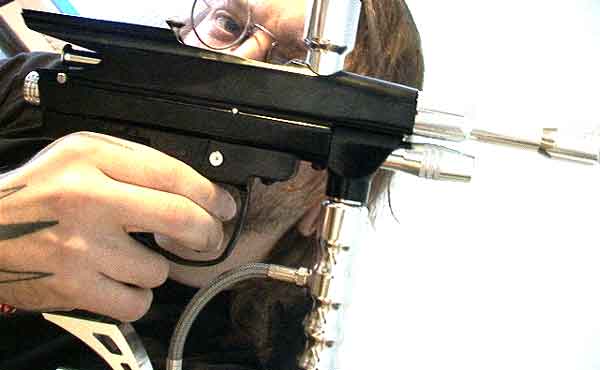 Anyway, a pile of people have been sending me messages not so much to thank me for adding spellcheck to the forums, but to ask me to add it to the IM system as well. Here's the deal: adding it to the IM system is more complicated, since it has to parse out reply lines as well as UBB and all that. In addition, I work for tips. Not a single person has donated via PayPal regarding the spellchecker (the last donation was almost two weeks before I added that)… So… If you want to have a say in what order features get added, feel free to say “PS. I'd really love spellcheck on IMs” or “Please turn custom layout on” if and when you throw a quarter in the hat.

I should say that I don't mind if people don't donate — it's not at all a requirement of using IAM, and I absolutely do not expect everyone to do it or anything like that. So don't feel bad if you haven't donated financially. Anyway, the BME experience update is uploading now with about 150 new experiences. I'll make a quick post again when it's there.


* In all seriousness, the big beverage and fast food companies have done this. They force schools into exclusive contracts where the schools guarantee volume in order to get “good” prices. When the schools can't meet these quotas, the companies then force the schools to allow students access to their products during class. For an excellent overview of how these tactics work, read Fast Food Nation. ** Why do we find it easy to ignore 300,000 deaths in one place, but feel absolute outrage when 3,000 die dramatically? Fat folks don't make for good TV unless they're funny fat folks? Do we have some free-will delusion that “it's their fault, after all they were eating” even though many became physically and mentally addicted AS CHILDREN? *** I found out the local microbrew sells custom beer for half the price of the Beer Store, so I've put “keg fridge” on my Christmas List (fingers-crossed). If Santa brings me one, I'll always have high quality fresh unpasturized beer on tap.
Comments (0)

First of all, THE SCRAPBOOK. After some yelling at and financial threatening of the printing house, we've got confirmation that the books are ready to be picked up. So they'll be grabbed today and shipped tomorrow in softcover. If your order is for a hardcover it will ship later in the week (I'll know more precisely later today I hope).

We should have an over-run of the softcovers. Odds are that the hardcovers will get to people in time still, but if your order is time-dependent (for example if it's a Christmas Present), if you'd like to swap your hardcover order for a softcover one (let me remind you though that the hardcovers are way nicer), contact BMEshop and they can do that (with a coupon being issued for the price difference)*.

I posted this in the Whatever forum, but I thought people might be interested to know that there are currently 64,497 active forums on IAM (as of 10 AM this morning — there should be more now). Seems like a lot of forums to me!

* With apologies for the run-on sentence.

PS. Thanks to Roberto for the sticker.