I used to watch TV

First, I told PiercedPuff I'd mention the survey she's doing for her experimental psychology course. It's to figure out (I assume) if people with body modifications are on a downhill slope. Personally I wished there were “uphill slope” questions too; I think that my life is getting better with time at least on most things, and I hope that is the norm here. In any case click here to help her out…

So the whole time I've been looking at that flag design I've been thinking, “who did I rip off” and watching SNL last night (which was horrible) I realized that it was a knockoff of the Jackass logo. Not so much the more recent versions, but my original hand-drawn doodle for it was almost exact (oh, and yes, the truck is literally only about 2″ too tall to fit through a standard barn door — last time we had to dig a trench to park it in): 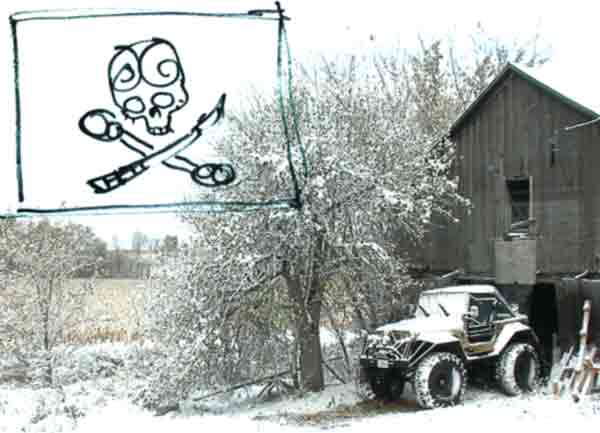 The idea was tossed around earlier in the forum about doing a flag. Now, I could put just a calm logo on it (and that would look good), but how much fun is it to fly a calm logo? I know that I live in a pirate ship, not a monastary! Anyway, this is not a final idea or anything even close to it, but I did a tiny bit of doodling… More talented artists are absolutely welcome to give it a go. 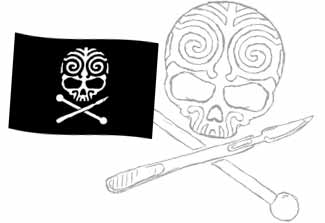 Maybe the snow will stay this time; as you can see there's a bit more coming down than the last few times. Leeta and I aren't getting our hopes up too high though, it'll probably melt again. At least the satellite is cutting through the snow most of the time.

I have to admit that as much as I hate the latency and sometimes slow upstreams on this dish, on a purely philosophical level I absolutely love what that dish represents. That said, I think that satellites are maybe not the most cost effective solution — I'm more inclined to say that a blimp at 10 miles is the way to go. It would have basically zero latency, and could be much cheaper to deploy.

I rode in to Belleville this morning with Ryan and picked up a few of the things I needed for the Jeep. I've replaced the winch hook, and now there is a good tow rope and jumper cables. I was surprised how hard it was to find decent rope and hooks at Canadian Tire — most were rated at 3500 pounds and below, as were their winches. If I'm remembering right I'm running a 9500 pound winch.

Anyway, as you can see I also had just a little bit too much fun on Rachel's 4-wheeler… Because the snow is fresh/wet, I'm still getting traction, but at the same time it's slippery enough to do donuts. Want to place odds on what injuries I get this winter?

Damn I love living out here. The isolation gets to me from time to time, but it's just so much fun.

We just got in our first shipment of DVD blanks! We could have just printed cheap labels ourselves, or even used traditional blanks, but we wanted to “do it right”. These are true silk-screened DVDs, and the DVDs are shipping in full-size cases with inserts — so when you put them on your self alongside your storebought DVDs your friends aren't going to assume you're some kind of pirate. 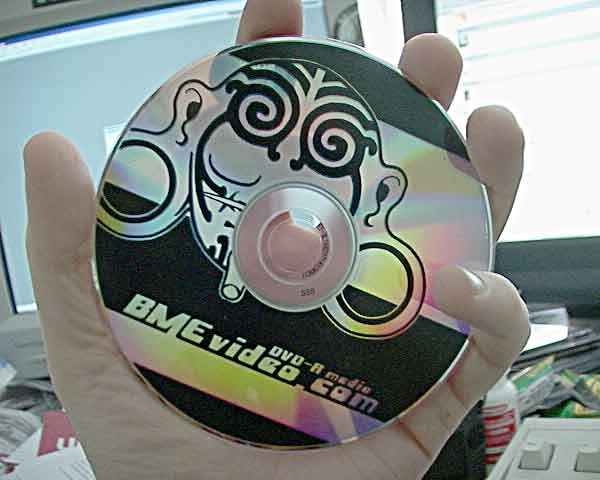