Samppa's performances are getting really intense! There are hundreds more pictures from him and his crew in tomorrow's BME update, but I wanted to share a picture or two of this deep torso skewering (temporary, part of a performance) — don't worry, he's fine and suffered no permanent damage… Next time, “deeper”.

Honestly, it makes me so happy to see the work that's coming from Scandinavia and South America and Asia — that “excitement”, where every day is full of new experiments, at least on an industry level, died out here (in North America and I suspect most of Europe as well) five years ago. I think it was actually that spirit that really pulled me deeply into body modification, and it totally re-energizes me to see it's still alive.

PS. Please don't try this unless you really really do understand what you're doing!

Now this is funny…

A number of the financial magazines have pointed out how odd the current trend of executives pleading ignorance is — these are people who are paid an utter fortune to provide expert services. To suggest an “I didn't know” or “I was incompetent, it was an 'honest' mistake” excuse, simply doesn't work in this case. Anyway, I thought this related story was OK. Here's a summary:


Bush: “We need to stop US companies from evading taxes by setting up offshore subsidiaries! It hurts the war effort, and, more importantly, it's fundamentally evil. When you support companies that shelter their taxes offshore, you support terrorists.”

Reporters: “But Mr. Bush, didn't you start a subsidiary in the Caymen Islands when you were on the board of Harken Oil? Weren't you trying to funnel a $25 million contract to drill for Arab oil through this shelter?”

Bush: “Well, yes, but we didn't actually manage to evade taxes because we weren't a profitable company!”

About twenty people have asked for this shirt in the last week, so we're working on a new variation on it; red on black. This is the “low key” version of the shirt — the last two iterations have been on what I'd call “daring” colours. Ryan and Corrie will announce the specifics when it's ready to go.

From the BME newsreel:

Artist ManWoman was presented with an Award of Excellence recently by Lois Hole, the Lieutenant Governor of Alberta. This took place at a gala event in the Palliser Hotel in Calgary on the occasion of the 75th anniversary of Alberta College of Art and Design, when selected alumnis were honored for their contributions to Canadian art.

Her honor, Madame Hole, gave each recipient a special pin and a big hug. ManWoman then gave her one of his signature flying hearts, made by Georgia Wik of Cranbrook, which she was delighted to receive. It was immediately taken by her attach, a very handsome young man in a white Naval dress uniform covered in gold braid, who also was her security guard. 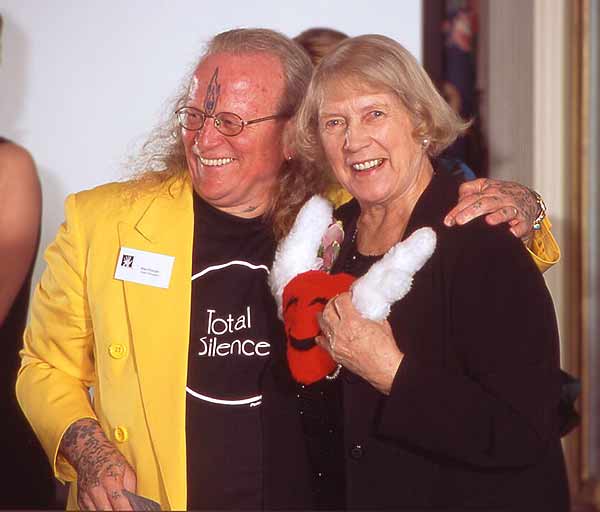 Big thanks to smeg-head and Emc1683 for being the first two to submit images via the new engine! I should mention that the bot that does the actual emailing runs about every half hour, so if you submit an image and suddenly change your mind, you can probably abort it by deleting the image after making the submit request…