Well, my “Shannon sleeps to much” problem was helped this morning by the men in brown. UPS knocked on my door about six hours into sleeping with a big box of computer parts (dunno what it is, it's either Rachel or Jon's I guess). I was doing an experience update last night and it of course generated the typical messages. I'm not sure which experience this first person wrote, but if you recognize them and you reviewed their experience, I guess they want to talk to you:

HEY ALL I WANA SAY IS FUCK YOU ALL!!! I DONT GIVA A SHIT WHAT YOU PEOPLE THINK AND IF I HAD SOME OF THOSE PPLZ EMAILZ I WOULD TELL THEM TO BURN IN HELL!! FUCK YOU ALL AND I WISH I DIDN'T SPEND MY TIME DOIN DIS SHIT

The author of this experience was none too happy either when he was told that capital letters were required (even though he checked off a box acknowledging that he agreed to that):


i really tried hard to put in the best story possible. i am extremely offended by what you wrote and i would like to let you know i will never support BME ever and i will tell all of my friends how horrible you people are.

So what do I do? I am left with the annoying choice of (a) have a bunch of potentially very loud kids running around slagging the site, or (b) accept crap for the site. I think I'm probably making the right decision by sticking with the first option. Along those lines, below are some images recently submitted to BME, but rejected for obvious reasons (my apologies to those that send, I know you meant to help, but PLEEEEASE read the requirements next time):

Well, it's off to more work with me…

…I don't know why I deal with Artik for shirts. We're picky about quality, and have to send way too much stuff back to them (if it's not perfect, we're not about to damage our name by selling it). Anyway, I just picked up the BBQ shirts, and they messed up the screens.

I haven't decided yet how to handle it; I can either refuse them and make them print new shirts and sell them for $20 as planned, or I can accept them at a deep discount and sell them for $10 at the BBQ. I've just put up a poll; especially if you're coming to the BBQ, please do say what you think is better.

Anyway, here are the problems:

Just got a bunch of hatemail from the people who were removed for slagging heavy mods (and no, saying something is “sick shit” or “brain dead”, is attacking, not “stating an opinion”), accusing me of abusing their rights (free speech), called IAM a cult who's members are “morons” and “followers”, tried to claim that I'm ripping everyone off and getting rich off them, and all the other typical statements… Topped off of course with calling me a retard and making fun of Canada, heh…

Anyway, I told them the same things I tell everyone: If you don't like the rules here, you should make your own site. Knock off IAM's interface if you want — I think it's well designed, and I long ago released the idea into the public domain. Unfortunately, 99.9% of people are willing to put enormous energy into complaining and insulting, but very little effort into actually doing anything.

A solid coder could build IAM, at least with 80% of the featureset that's here now, in a week of work, tops. It's really not hard. If you aren't talented enough to do it yourself, and you're really convinced it's a money making machine (a common accusation) then you should be willing to pay someone to do it or license similar software… Now, I'll warn you that IAM is a “money losing machine” and it's an investment that wouldn't pay off without really rethinking policies like no advertising, but I figure if people want to accuse me of that they should be willing to stand behind it.

I don't know what it says about this world when people are more inclined to desperately try and blame others for their own acts, and don't want to do anything to help those around them… It's very sad, and I hope that as we mature as a species it will become a thing of the past.

Oh, and since it's the most common accusation, here's some advice on how to own cool cars (and I think I do have some very cool cars) without spending too much money:

Hell, considering the hours that I work, I can't say that my path is the best decision if money was my goal… Luckily my goal is to be happy and make sure the people around me are happy, and to always put my effort into things that I can ethically stand behind. As long as I have enough money for good food, a decent place to live, and the ability to occasionally throw a fun party, I can't complain.

…and as a P.S., I hope that if anyone has concerns about the TOS or the ethics surrounding this or anything that I do, that they are comfortable approaching me about it.

Well, the hour and a half of BBQ footage just finished getting captured, so it's off to the editing bay with me! I'll probably thow some stills up shortly.

Whenever things are going badly for me, they seem to always correct themselves into a better-than-before scenario pretty quickly. As you know, the t-shirt run for the BBQ looked like crap. The screens weren't lined up properly and it just didn't look good.

Anyway, the owner of the business came in to deal with it personally and I just got back from seeing the new screens and it looks great — everything is lined up perfectly and we're going to run it on half black shirts and half assorted colors — this design actually looks better on a light shirt in my opinion. They'll be first come first serve.

I was given the crappy shirts, so here's the price breakdown:

Anyway, here's the print on a light tan shirt: 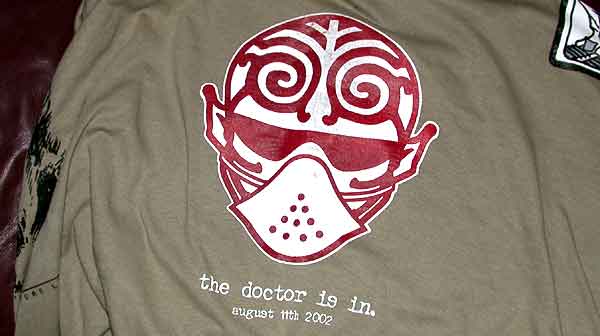 I will to broadcast this message as well to those on the BBQ list, but here's what I'm sending, just in case someone only sees this page, not the instant message:


First some info on the BBQ shirts. They are $15 CDN ($10 US) for good prints on either black or assorted colors (first come, first serve). There are also misprints (all on black shirts) which I can sell you for $5 CDN if you buy it with a good shirt, or $10 if you buy it on its own.

1. Stay off the empty lot, it's not my property and it could get us in trouble.
2. Stay in the back laneway (not the side of the houses).
3. PLEASE put garbage and bottles in the garbage cans.
4. Don't hassle the crazy lady, let's not get the cops called!

I think that's it. The BBQ starts at 2PM (but come as late as you want) and goes till about midnight (when I'm sure it'll move to various hotel rooms and bars and clubs).