I've gotten mostly supportive messages, but I've gotten a few people who are not happy with me that say basically one of two things:

1. How could you turn your back on the church if you still believe that mods are spiritual?
Why in the world does one have to belong to the CoBM to feel that there's spirituality in mods? Some people seem to think that the CoBM has a monopoly on spirituality. Not only does it not, but there is not a single person in the CoBM that is qualified to act as a spiritual leader (and no, I don't think I'm qualified either). Body modification and body ritual groups existed long, long, long before the CoBM was ever even considered (and I was involved in these years before the CoBM was even considered). I don't need the CoBM to be a spiritual person, and neither does anyone else — these are by definition personal journeys!

2. Now that you've left, why don't you just butt out?
If I believe that the CoBM not only doesn't add anything to the spiritual landscape, but I believe that it has the potential to actually damage that spiritual journey, if anything it is my ethical duty to say something about it. The only thing that's stopped me from saying far more is that I have many friends in the CoBM. Like I said though, I've been involved in ritual and spirituality separate from the church for far longer than the church existed, and it's been my observation that the involvement of the church has deeply damaged the effectiveness of these rituals.

I'm not telling anyone what to do. As with everything I do, I'm trying to do my best to pass on the few things that I have learned. My hope is that people can absorb that, absorb the same from other people, think about it on their own, and make an intelligent and informed decision.

Just try and be happy and the rest will fall into place.

In any case, if you don't like reading my opinions, don't read my page. I'm not forcing you, and I really don't care if you ignore me.

On a more pleasant note, I am working on a small update right now (the last image update before year's end), and this tattoo caught my eye. It's on a dentistry student in Germany: 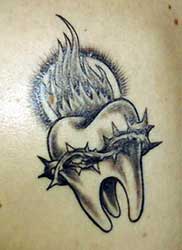 Alex just sent me the following comment on the tongue piercing and brain abcess story:

You know, if you've been on the net for a while, Google Groups is really fun (and sometimes makes you see all the stupid things you said). Anyway, I was trying to find the first posts ever about the CoBM, and I found this one. It's written by Stan Schwartz, the maintainer of the rec.arts.bodyart tattoo FAQ in his Long Beach tattoo convention report posted 2000/05/31:


I saw Steve Haworth there, and he plied me with information about his latest scheme to form 'The Church of Body Modification.' The idea is that if we form a church based on this, if anyone gets fired for having a nose ring or something, we can squeal and cry 'religious discrimination.' I'm not sure if that will fly with the courts, but he seemed quite excited by the idea.

I also found Daddy Kane's post about people dying from uvula piercings — remember that was what everyone was saying when Jon Cobb first did the piercing and Gauntlet was doing their damndest to discredit him:


Here's the story. The boy who supposidly died from this was a homeless kid in NYC and it's all rumor. If the incident happened, it was BEFORE the PFIQ article on Jon Cobb and Gauntlet is in no way involved or implicated! But there is another issue here that should be addressed you know the old story about as soon as you tell a kid NOT to do something, they feel behooved to do it? Well, this post about the uvula piercing is really irresponsible. It's an irresponsible piercing to do to someone or to have done...downright dangerous and these kinds of posts will only encourage some fool to go out and try it. These are precisely the things that will ruin the piercing movement for everyone! Yes, I work for Gauntlet, but please understand, I speak for myself! Let's all strive to keep piercing alive, not kill it because we want to do something that few have been able to do. Ego kills also!

Anyway, I could read those old posts all day, but Christmas is coming…

For the past three weeks, people have been sending me various articles about how tongue piercing can lead to brain abscess. Big deal. You're more likely to get a staph infection from a papercut and loose your legs to necrosis. How many tongue piercings have been done? Certainly a million. If the odds of an easily treatable infection are one in a million, then I'm not too worried.

It should also be pointed out that the did not follow the advice of the piercing community (it's generally accepted that you don't take the jewelry out of an infected piercing because it can trap the infection inside, leading to an abscess). In any case, if you want to argue against tongue piercing, base those arguments on chipped teeth, which is a real measureable risk.

Stopping tongue piercing over the risk of brain infection would be like stopping wearing any clothing with a metal zipper because it might attract lightning.

Oh, and this is an old link, and I might have already linked it, but if you buy stamps, make sure you ask for ones with a flag on them!

First of all, my leaving the Church should not have any effect on anyone else. I don't want anyone to leave the CoBM just because I did (nor should anyone have joined JUST because I did). If you read the story below that was told to me, and get the same thing from it I did and choose to leave, that's good. If not, and if being in the church makes you happy, I'm glad it's there for you and support you in continuing to be a member.

I've gotten a concerned message about the cardreader. Someone said that it was “rude and unfair for me to ask people for money for something I'm going through a phase over.” Ignoring the fact that calling something I poured a year and a half of my life (and earnings) into is extremely rude, I do understand why someone would be upset.

The CCoBM does have the cardprinter and will be putting it to good use — it's not mine or anything like that. However, if you feel that the church isn't the church anymore without me in it, or you feel that I somehow misled you over the printer, please do tell me and I will personally refund your donation. Please realize though that this refund comes out of my pocket, not the church's. But I'd rather that than have people feel I tricked them out of their money — anyone who knows me knows that's not what I'm about.

Anyway, if you want a refund on that, write me at paypal@bmezine.com.

Since there's all sorts of speculation as to why I left the church, and people are coming up with numerous ludicrous theories as to who got into a fight with who, and who has a grudge against who, I feel I should explain before things get out of hand. Leaving out many of the more obvious logical arguments, I am simply going to tell a story here to clarify.

I was recently walking with an old friend, a far wiser person than I. We were talking about the Church of Body Modification and he asked me, “Shannon, why do you stretch your ears, and why do you take part in these suspension events?”

I told him a long story about the relationship between inner and outer body images. Then I did my best to explain to him about the relationship between body and soul, and about how body modification could strengthen these connections. I tried to describe my spiritual experiences from ritual as well. I told him all about the potential spiritual benefits, and then pointed out how important it was that we all be able to express these things.

He paused for a minute, and then turned to me and asked, “but does it make you happy?”

“Isn't that good enough? Why do you need to tell me anything other than that?”, he said to me, and, in a moment of clarity it became obvious that any formal organization or doctrine that I try and pile on top of these honest truths simply obscures them. I don't need a church to be happy. I need my freedom, and I need my friends, but I don't need a church.

I spoke to him a bit longer, and I told him that I felt that maybe the real reason it was so difficult to build the church was that we weren't spiritually mature, and maybe it would make more sense to form an organization that dedicates itself to spiritual research to attempt to answer the questions of doctrine.

He told me that he appreciated what I was looking for, and that forty years ago he'd been desperately looking for the same thing. Eventually though, he came to the conclusion that these things are best found through personal journeys, not through preaching — these things are vapors, and are perfectly understandable and valuable as beautiful mysteries.

And then we sat and watched a heron fly over the lake, and for a moment, I was at peace and happy.