I really, really want to build a new truck some time soon (I wish I could afford to get a set of 54″ Boggers), and since Caitlin is a welder, we can now do just about everything in-house and on the cheap… We just to move somewhere inexpensive that has some space to work. Anyway, I was watching rat rod videos, and thought this flaming exhaust was completely crazy…

So all this snow has me thinking a lot about the possibility that we're looking not so much at global warming, but climate instability that'll toss us the other way, into a severe ice age (more). I've posted before about the consequences of rising sea levels, but the reality is that in the last half century, ocean levels have dropped significantly (more, more, more), and while many glaciers and ice systems have melted, others have expanded (lots more). While many suggest there's insufficient evidence so far, many climatologists believe that global warming can kickstart global cooling. With mile high glaciers, big enough to gouge out lake-sized holes from the earth, a significant percentage of human cities would be scraped away to nothing, leaving almost no archeological record (Australia may be a good place to escape to — Aboriginal culture was one of the only on the planet that survived — just barely — the most recent ice age). If one has to choose, warming is definitely better than the alternative…

The Mayan calender “ends” in 2012, which is when we go through Solar Cycle 24, a spike which may disrupt satellites, communication, and planes… but Solar Cycle 25, in 2022, is predicted by NASA to be “one of the weakest in centuries”, which may well be enough to tip the scales and again cover the planet in ice…


Some say the world will end in fire,
Some say in ice.
From what I've tasted of desire
I hold with those who favor fire.
But if it had to perish twice,
I think I know enough of hate
To say that for destruction ice
Is also great
And would suffice.
-Robert Frost 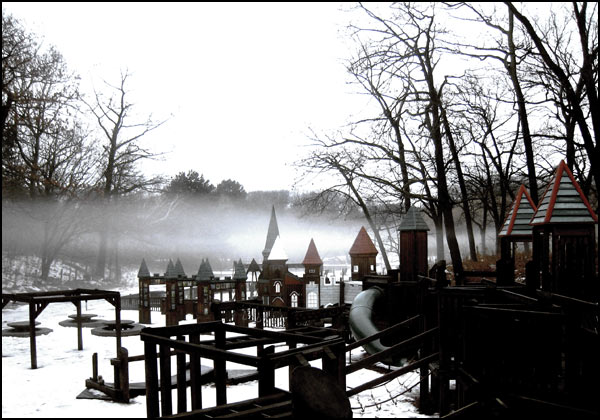 I'm totally into wasting way too much time on this train building game, which is remarkably stressful because of the shattering sound the bridge makes if it fails. Caitlin on the other hand is hooked on this puzzle game which is quite clever. Anyway, I love physics games in general (remember the darkly humorous dismount series?)… Any advice on your favorites is appreciated.

Other than that, the weather is getting warm enough (finally, I hope) that the next day I feel like spending a couple hours outside I'm going to paint my truck. I know, it's a little goofy, but I'm going for a sort of hillbilly chic and this will only take a little while to stencil… I really can't wait to move to a place where I can actually do work without neighbors complaining, and I can't plug in a welder or anything like that here either… so many things I could do if I could! 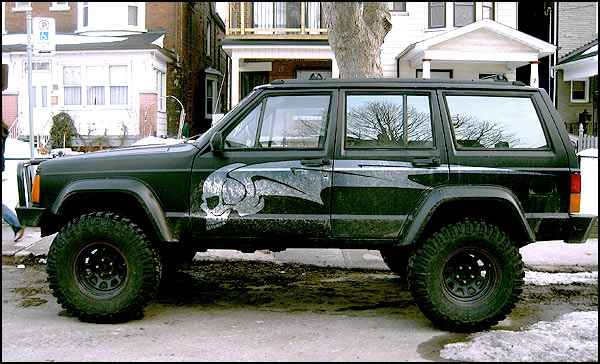 Before anyone asks about the decal project I mentioned in the past, I can't afford to do decals, but I can afford a couple cans of spray paint!

Caitlin and I went and say Doomsday today on account of me being a sucker for anything post-apocalypse… a pretty good mix of Escape From NY exile, tattooed Mad Max-style rat-bike riding bad guys, evil Republican-types, lots of gore, and my favorite — plague. The tattoos were fairly poorly done technically (they looked more like body paint), but were great stylistically (including a girl that reminded me a lot of Insectavora from Coney Island Sideshow), and the scarification was nicely done. 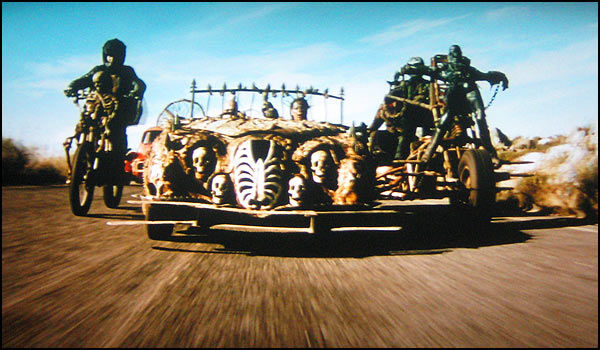 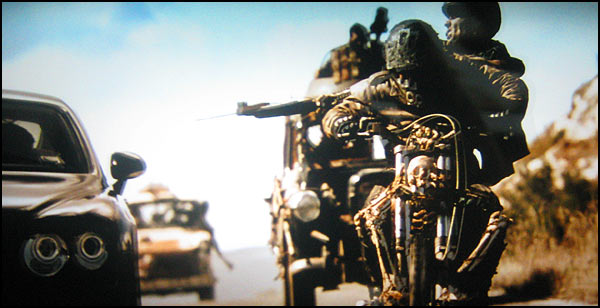 There were some very strange people seated around us in the theatre. There was a couple in front of us that had a big fight before the movie, and the guy had also bought a $8 tray of nachos, seemingly just for the cheese. Thoroughout the movie he laughed madly every time someone swore, and the people on either side of us cheered for every bit of gore, and another guy in front of us was wearing a wig and hid under a blanket the whole time… Then afterwards we went to the bookstore to look at magazines, but a Chinese guy that was camped out in the corner reading erupted a huge loud fart so we left.

The tattoos in the movie made me think more about an idea that I've had lately — in part from the “skullboy” interview — that tattooing is the ultimate nihilist movement. General feedback both on ModBlog and around the net seemed to often centre around the idea that he “gives tattooed people a bad name”, but I think that on some level, his “NO FUTURE” attitude is potentially on target. I see an aweful lot of people — arguably tens of thousands — of people getting body modifications from which there's no going back, that with only a slight shift in the permissiveness of society make life extremely difficult…

That said, if I'm to trust the movies, a slight shift in the viral landscape, and people with tattooed faces become the norm. Fingers crossed!

I finished “Ocean Storm”, drawn by Nefarious and painted by me. It’s a very wavy ocean, and in the sky is a band of stars and the sun and moon. A rocket is blasting off, en route to the space station. In the sky is also a “princess angel” as well as a singing bird, and a butterfly carrying two flowers. In the ocean is a sailboat with a star on the sail being captained by the world’s tallest snowman, with evil Ursula and the Little Mermaid swimming nearby as a shark jumps over them. Anyway, you can click it to zoom in. 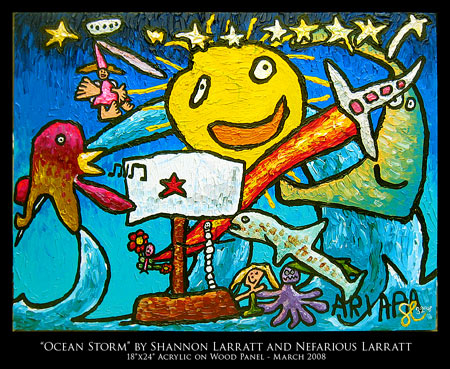