So I got food poisoning yesterday. Serves me right for using mayonnaise from a street vendor I suppose. In any case, that meant two things. First, it meant that I spent quite a while in my washroom reading Six Degrees (a book about climate change) among other unpleasant things, and I was up late watching the BBC Planet Earth special on polar regions…

Err, let me also say that I'm crazy tired so I hope I haven't made any glaring errors.

If our global temperature rises by about two degrees (400 – 500 ppm of CO2), which is the current “best case” scenario projected by most science folks, it's being proposed that this could totally melt the southern glaciers (if the temperature is sustained — other projections suggest that we'd have to add a few more degrees to see this happen), which means that a four mile thick pile of ice the size of the United States gets poured into the ocean. Outside of the other hellish things that would happen, this means twenty five to seventy metres of sealevel increase… I was wondering what that would look like so I downloaded a bunch of topographical maps…

I'm sure I made some mistakes in rendering the map, but that's about a thirty metre increase, so on the “better case of the worst case” end of things if I'm understanding what I'm reading and doing… If you want to look at the map at higher resolution I made a few versions:

Since that level of climate change displaces the vast majority of the world's major cities, I guess we'll see massive war and resource conflict do us in long before, but yeah… it's definitely an interesting period to live through (if we live through it), isn't it?

Kids are easy to please

So finishing this rag rug has become a bit of an obsession for me. I made a lazy move about a third of the way in and made the whole task more difficult (basically the outside is wound looser than the inside so it's tenting a bit as I pull it together), but I could do a way better job if I do another one… I have a ton of sisal rope that I picked up for another project though so I think when this carpet (I guess it'll end up being a bathmat or something) I'm going to make a basket for my overflowing collection of markers with it or something. Either way, I just love the process of making stuff.

I got a new flatbed scanner today (it's not hooked up yet). You may remember that I dismantled my old one after it stopped being able to register a full color range… Anyway, I got it because the work on my first children's book is starting to move along quite well. It's a collection of poems and accompanying drawings a la Alligator Pie and books that I liked as a kid…

(I doodle ideas while I wait for my various doctor's appointments)

I really scratch my head at how shockingly bad kids books are. It surprises me a lot because I see so many webcomics that are just brilliant and charming (way nicer than anything I can make, not that I don't love my own stuff too — but there's such an ocean of creativity right now in the world), so I know the talent is out there, and really, creating whimsy for kids isn't particularly hard… So who knows if it's a conspiracy to make children stupid or some larger truth of the publishing industry?

Other than that I've been chugging along on a really wonderful interview that started out on the subject of atypical female genital piercing and has moved into an eye-opening conversation on the postgender experience that I hope people will enjoy when it's posted next week. I'll probably post a little mini-interview on female genital implants for the weekend as well I hope…

Anyway… I think I'm off to Ciro's later tonight for a drink with Blair.

Eyeball tattooing update — I had a nice time getting my eye ultrasounded this afternoon, although it took me a ton of elevator rides to find the eye clinic because I had the wrong address and Princess Margaret Hospital has three separate towers to explore.

Anyway, it looks like what happened is that when I rubbed my eye too hard about a week ago (I knew at the time I'd damaged it), I broke a bunch of blood vessels in the tissue (which was weakened by the tattooing) above where the muscle injects on the outer edge of my eye and a hematoma has formed over the muscle, which is also slightly inflamed. This should break down over the next few weeks without issue, although I have another appointment in a week to have it checked out.

The doctors were nice and gave me a printout of one of the ultrasound shots. Assuming I'm remembering what I was explained to me correctly, there's a legend underneath this shot. 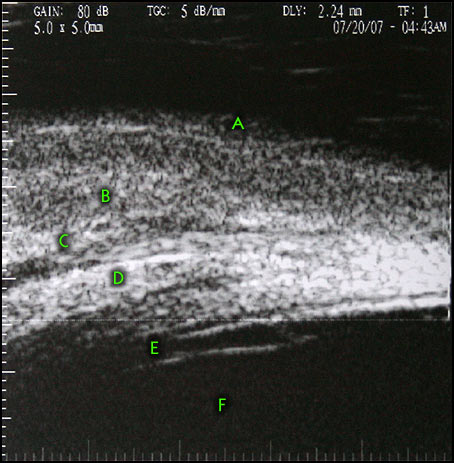 A. The conjuntiva (the outside of the eye)
B. The hematoma (the swollen part)
C. Muscle (slightly inflamed)
D. The sclera (the main shell of the eye)
E. Some peeling of retinal tissue (likely unrelated)
F. The interior of the eye.

Note: I may have C and D shifted up slightly; this wasn't the clearest of the shots so I'm not totally sure, but it's the one that was on the screen at the end so it was the one I was about to get a printout of…

My little rag rug is about three and a half feet across… I started to stitch it with heavy black thread, but I'm thinking about aborting that idea and knotting it with smaller bits of t-shirt. I like the idea of doing it that way conceptually but it'll make a lot rougher final product. I need to pick up a knitting needle or something though to be able to pull the cloth strips through the braids (only the centre section in the picture below is stitched and I'll probably pull those stitches). 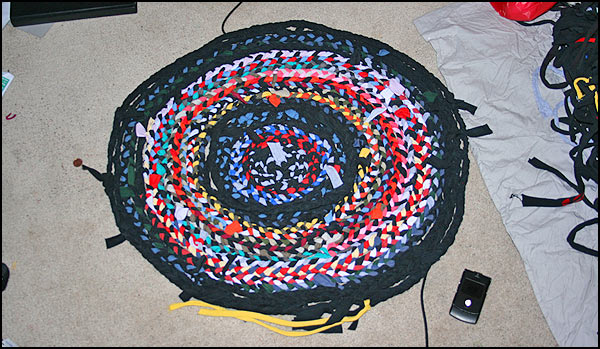 I know it's kind of cruddy looking but it's surprisingly relaxing.

Other than that, I know it's all over the internet right now, but I'm just blown away by this latest executive order passed by the the US government authorizing the asset seizure of anyone who criticizes Bush on the Iraq war… I'm sure that none of this stuff would survive a real legal challenge, but that doesn't mean it can't be used to destroy the lives of those who challenge authority too loudly — it's not easy to fight a major legal battle when your assets have been taken.

Oh, and this is one of the most interesting body modification interviews I've read in a long, long time.

Well, off to the hospital!

PS. I'm sort of bothered by the “blogging for profit” concept that's out there these days (how top bloggers make money and tons of articles on getting more popular)… Yeah, it's true that my blog has GoogleAds on it (I make about $150 a month on them), but I just think that people should focus on creating and expressing whatever is inside them, and not worry what anyone else cares — and certainly not worrying about what others want to read. Fine-tuning how you express yourself for an audience is a mistake. Unless you're shooting to be a big-time commercial blogger and your motivation is simply to treat it as a mercenary business, the dollar amounts are just not high enough to make it worth prostituting oneself. I know it's kind of a lame thing to be irritated by, but I think it's wrong.

Yesterday, as well as some programming and (really fascinating) interview work, I worked on a rug. Well, right now it's just a massive long braid made of bits of t-shirt left over from the BME t-shirt quilt project… But if I have time I'll stitch it all together today into a rope/rag rug. That said, I may change my mind and make a basket with it instead…

Later today I'm getting my eye scanned with some side-scanning technique, by the guy that invented the technology… As a tech geek, I'm looking forward to that quite a lot. I'll try and get copies of the results but I'm not sure if I'll be able to or not. Basically what they'll be able to do though is image the hematoma to be able to tell how deep it goes and so on.

I made a cherry tandoori meal last night using about half left-overs from some Thai food I'd ordered and various vegetables… It turned out well I think.

I woke up at about 4AM in a ton of pain because I'd rolled onto my leg. It sort of feels like it's swollen and about to explode from the internal pressure or something, but of course it's totally illusion. It's crazy that just resting on it can hurt so much when there's not actually anything wrong. That said, I definitely thank my lucky stars that only the inside edge of my leg is affected. I don't think I'd be able to cope if it affected both sides of my leg. Since it's just one side I can be careful with things like pants so when I'm putting them on they only touch the healthy side and so on. Socks sure hurt though so I have to balance stinky-shoes and pain, haha.

I had a really weird seizure experience yesterday… I went out to lunch with my friend Daniel. I was a bit shakey when we got there, but that's not really that unusual for me. Then all of a sudden I had what basically felt like a full-body “brain freeze” — a very strange and overwhelming pain. It was extremely unpleasant. Anyway, Daniel helped me walk it off but I really felt pretty shaken up for the rest of the day (but it didn't stop me from enjoying So You Think You Can Dance, haha — which ironically helped me at the hospital because it gave me something to chat with the nurses at the eye clinic about). It happens every once in a while but this is the only time I can remember it being so physically difficult.

Oh, and I've been hearing rumors going around that I sold BME. That's 100% false, and it's not going to happen — in part because I consider BME as being owned and created by this community, and it would simply be wrong to sell it. If I get a lot sicker or something crazy like that and was for some reason not to continue taking a primary role, BME would continue with the people currently involved.