This Avante has been on sale for ages and no one seems to want to touch it. If it was a slightly different year (with the round lights, not the square ones), and was a convertible, I'd buy it, just because then I could be driving the car from Gattaca… But it's the wrong year, I can't afford it, and my 996 should be back on the road next week anyway. I should post a picture of what I'm doing to it…

It's at a garage just West of Gentry Lane (the exotic/luxury car dealer) on Dupont here in Toronto. Oh, and I'm pretty sure that the monster truck Camaro, also in Toronto, is still for sale, if there's anyone in the area reading this looking for a weird car.

Whew! So tired! First of all, ModBlog is updatd as is BME (say click, take a pic)… and I may stll update the kit car site also.

Anyway, there's a burger (and more) place on the corner of my street (“Garden City” or something I think) that's pretty good [edit: Back to the Garden]. It's open from 5PM to 10PM if I remember right, and opening at noon on Sundays. But the reason I mention it is the waitress who just started today:

You'll note that she's got a facial tattoo of a moon in a “third eye” type location, and I'll add that she's Mexican. Anyway, I mention it because I went out of my way to tell the owner (and I assume hirer) how much she (and his other tattooed staff — this was a mainstream place) and the other tattoed employees made me appreciate him and his business and want to support it. And I meant it…

Seriously, if you see this same thing, make sure you let the owner knows that his or her decision is making them money. It helps us all, and like I said, it's true.

I just ordered my (entirely promotional) business cards to give away this weekend at the convention to try and promote the kit car blog site. I think they cost less than the Google Ad money I've made so far off of it, so I guess you could say they were free?

Anyway, I'm still looking for someone to help me split the drive from Toronto to Carlilse to Philadelphia to NYC (although I may not drive into NYC), and then back to Toronto from the 19th (Friday) to the 22nd or 23rd (Monday or Tuesday). If you want to help with this, call, email, or IM me ASAP.

Anyway, Phil will be here soon for work — today is tattoo update day!

I always cringe at these “in progress” entries because I'm afraid that people will see this, think I'm incompetent, and not ever see the final product, which will still look radically different… But if you've seen a few versions of this painting I think you know the level of flux it's in.

You can see the previous version a couple entries down from this one, but this afternoon while Saira was helping with Nefarious (bathtime), I filled in a nicer background to work over for the top half of the painting. It will still darken a ton as I work it over, and there's an immense amount of detail and texture to build up, but this gives you a general idea of the tone and shape of the deep background. 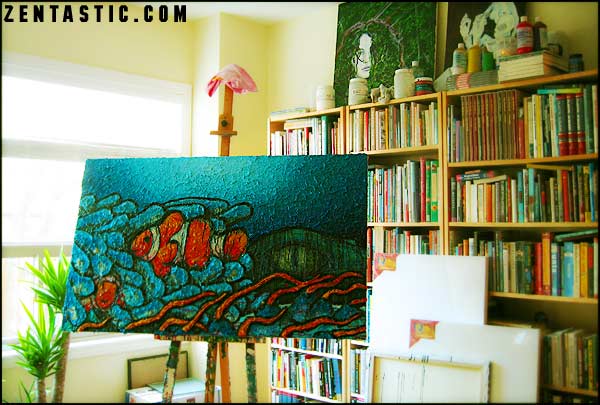 I guess the thing that's probably becoming obvious to you if you have followed my paintings is that while I do have a traditional fine art background (so I can do a realist-style portrait if I have to), my theory of art is pretty much have fun and focus more on getting something inside you onto the canvas rather than trying to be technically skilled… I don't think that what makes a good painting has much to do with how high the skill is (although certainly there is a “minimum standard”), it has far, far more to do with how much of yourself has been invested in it.

Yes, this pretty much means that “what's inside Shannon” is cartoonish, childish, and simplified fantasies of my view of the world and the way I wish it looked and felt…

I am proud to announce…

There's a passage in the Bhagavad Gita that reads,


It goes on later,


It is better to do your own duty
badly than to perfectly do
another's; when you do your duty
you are naturally free from sin.


Ghandi summarized the above as “do your allotted work but renounce its fruit”. One of the reasons that I help fund events and projects, have sponsorships, internships, and so on — and never (I think?) do paid advertising of any sort — is because I believe it runs contrary to what BME stands for and what I stand for. BME is a community project, and while I think I deserve to do alright, I also feel I have give something back to the community that built it.

I know a lot of you are already aware of this, but instead of running advertising campaigns and paying money to corporations, and doing the normal “business growth” stuff, I want to this year start officially sponsoring athletes and others in the public eye. The very first person to make this list is MMA fighter Mike McQuade who you can check out at IAM:beenthroughit and also at the July 7th RING OF COMBAT 11 a the Tropicana in Atlantic City (and future fights of course).

We're working on a shirt for his team right now; here's the first draft. As soon as it gets his OK, it'll be run, both for him and his team and family, and will be added to BMEshop — and $10 from every shirt sold goes to support his training. Anyway, here's the draft:

Ironic that I would use a quote from the Bhagavad Gita to explain sponsoring a fighter, ha. Oh, and I will need someone who can donate some time to help maintain a Team BME page of various past and present sponsorships. Write me at glider@zentastic.com and remind me how our lives overlap and what your skillset is please if you have the time.

Other than that, I'm probably going to have to reboot IAM briefly in a little while.