Since I'm being asked how to get copies of Burst so much (I'm not sure; Ryoichi may know), in the interim I'm posting contact sheets of most of the pictures in the BMEfest article. If you're in one of these pictures, email me at glider@bmezine.com and let me know which ones you're in and what your IAM name is and I'll shoot them back to you at full size.

I'm not sending out the PornFest ones, but I have given them to Badur so talk to him about that.

I'm not so sure if they're funny or not, but I really like the comics over at spamusement. The concept is that you take an actual unaltered line from a spam email, and draw a picture that represents it. Mine are not very funny at all, but it's not a bad writer's block exercise.

See, I told you they'd fall somewhere between boring, stupid, and psychotic. They're embarassing to even look at with my monitor turned off. I'd love to see what someone genuinely funny would do with this.

PS. Saira's community radio fundraising show is tonight for those that listen.

Just got the latest BURST magazine with lots of IAM member coverage from Ryoichi. Those of you in Japan can of course pick it up on the newsstands, but for those of you elsewhere, here are a few pictures (there's even more coverage along with a DVD inside the magazine).

Pictures from BMEfest 2004. Please be warned that these are quite high resolution photos, but that also means that you should be able to see who's who in the pictures.

Before BMEfest comes Badur's pornfest. What, you didn't know those photos would be published!? Uh oh!

I got an email from a grade nine student asking to talk to people in the “body modification social group” so I volunteered to answer his questions. They weren't the sort of things I usually get asked in an interview. I'm not sure my answers will be at all useful to him, but for my own records I'm archiving it here. It's pretty bad from a business point of view, but I tend to give priority to student interviews over big media… “Give them a sense of pride to make it easier”, you know…

1. What kind of music do you listen to?

2. Are there any expressions or slang terms that you use?

I don't think so.

3. What do you enjoy doing in your spare time?

It's very rare for me to actually have any spare time. If I'm not working, I'm writing or painting or building something. I like creating things. I like working. As they say, I'll rest when I'm dead. I enjoy not having spare time.

4. Do you have another social group that can be considered your enemy?

Not specifically, no, but any group that opposes personal freedom is my enemy. In general that means religious groups. I don't care what rules they want to set for their own lives — that's their decision and their problem &mdsah but when they start trying to tell me and my friends what we are and aren't allowed to do with our lives, they become my enemy, and I will destroy them if I can.

5. What kind of role do you think that the government should play?

As little as possible. People should be able to do anything they want to as long as they're not directly hurting others. Government should protect people from being attacked by their neighbors, and there are a few services that the government should provide to guarantee everyone a base level of life (health services, roads, and so on), but really, the less government the better in my opinion.

6. What political party do you support?

In US politics I support Michael Badnarik and the Libertarian Party. I believe that they are the only viable party that stands for the individual freedoms that are essential to keeping America “American”.

7. How do you envision america in the future?

Honestly, I have no idea. It could go in a lot of directions. America is at a critical point in its evolution as a nation, and the decisions it makes over the next ten or fifteen years will determine not only its fate, but also the fate of the world.

There are two issues that worry me most of all. First of all, election and campaign reform. Right now, politicians are elected using many millions of dollars of corporate money and donations from the richest 1% of the population. As a result, politicians “work” for this money when they are elected, rather than working for the people of America. That is why we have problems like you've mentioned — almost all of the problems facing America stem from problems with the way politics are financed. I believe that if this issue is addressed, the rest will fall into place.

The second issue that I think is essential for America to deal with is the environment. We are on the cusp of a worldwide environmental collapse. Plankton levels in the ocean are down 30% in the last twenty years (that's a lot!), and fish today look radically different than they did when I was a kid — species that were once fat and healthy are now emancipated (damn, I make this typo every time… it's supposed to say emaciated!) bottom-feeders. We're well into killing off the bottom of the food chain, and when that happens the ocean dies — all life, gone… and when that happens, CO2 levels in the atmosphere spiral out of control and, boom, no more life on land either.

As if that wasn't enough, because of our overuse of factory farming which relies on massive water use and heavily drugged animals we've not only destroyed 90% of the fresh water systems on the entire planet, but we've also created new strains of drug-resistant bacteria that could easily start a plague which could lead to most of the human life on the planet dying. The bacterial changes in our atmosphere are scary when you look at the fine details — for example, food rots hundreds of times faster now than it did fifty years ago.

9. What type of clothing do you like to wear? where do you shop?

I wear pretty normal clothes on the whole &mdsah fashion-wise I use my body modifications to express myself more so than my clothing. That said, I have been making my own clothes commercially (ie. the BME line of clothing) for I think eight years now, and before that I made a lot of my own clothes personally. It's extremely rare for me to go shopping.

10. What is your favorite food?

I like avocado sushi rolls a lot! I'm a vegan, so I don't eat any meat or animal byproducts (ie. cheese, eggs, honey, and so on). Other than that I'm pretty easy and enjoy most foods, but don't really have a favorite.

11. Did you vote last election?

Yes, but I voted in Canada, not in the US. Here in Canada I tend to vote for the Marijuana Party, because I believe that the notion of person freedom that's required to institute a full legalization of marijuana would set into motion a series of other freedoms that would have very positive effects on society.

Space is the place

This is copied directly from metafilter, as is the comment following it:


Staying the Course Isnt an Option "If Bush is re-elected, there are only two possible outcomes in Iraq: Four years from now, America will have 5,000 dead servicemen and women and an untold number of dead Iraqis at a cost of about $1 trillion, yet still be no closer to success than we are right now, or The U.S. will be gone, and we will witness the birth of a violent breeding ground for Shiite terrorists posing a far greater threat to Americans than a contained Saddam."

This administration has done such a brilliant job tying Iraq to 9-11 that I wonder what will happen when US solider casualties break 3000. What will it mean when the war in Iraq results in more dead Americans than the attacks of 9-11?

A piece of trivia that's related to that comment — adjusted for population, the US has killed approximately 165,000 Iraqi civilians (more). So you can imagine why the average Iraqi hates America these days. They didn't a few years ago, but wow, they sure do now.

These could be exciting times. So many wonderful things are happening that could change our future for the better — the question is whether this horrific foundation against world stability that Bush is laying will destroy the whole effort.

Virgin Galactic just announced plans to start flying commercial flights into space within a few years. How amazing is that? On Wednesday, September 29th (best day of the year), Burt Rutan and Scaled Composites are making their first X-Prize run and flying a three-person private space ship out of the atmosphere. Also on Wednesday is the closest large asteroid pass, when 4179 Toutatis gets less than a million miles from us (we had an even closer pass earlier this year but it was just a tiny rock so it doesn't really count — this one is big enough that with just slightly different timing it would have killed everything on the planet). You think incredible change happened from 1800-2000? It's nothing in comparison to what'll happen from 2000-2200.

It's sad when you think about where we could already be if it wasn't for war. For example, the Soviet Buran shuttle — which looks similar to the US shuttle because they knocked off the aerodynamic design, but is internally totally different, and able to lift three times as much — was developed for about 1.5 million rubles. Even if you include the total cost of developing the Energia booster system, you're still looking at under 15 million rubles — or 750 million US dollars (aka one day in Iraq). The Soviets were going to use this to build colonies on the moon, immense space stations, and so on… of course, a combination of economic mismangment, the costs of running an empire, and escalating arms races bankrupted them and the dream died.

All arguments about economic differences aside, you understand the core point: if you've got $20 billion a month to spend, are the people of the world best served by war, or by science? Along those lines (tangentally at best) let me mentiong The Museum of RetroTechnology. It's really an amazing site, full of pneumatic amplifiers, combat cutlery, monowheels, gyrocars, analog computers, steam engines, and so on. Sure, not much of it ever panned out, but you can bet it was still a better decision than war.

I don't instantly recognize this photo, but I know it's an IAM member so I'm posting it here. If you know who this is, drop her a line and let her know she's got fans. 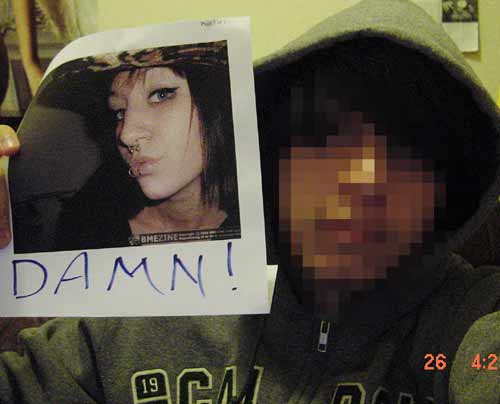 Let's see… Other than that, in the context of the article below, I'll mention that if you're a neo-nazi and you're looking for a studio that doesn't mind your views, this is from Danny Emery over at Philly Ink Tattoo. It's not something I'd post in the BME galleries, nor is it a stance that makes sense to me, but it is something I'm willing to cover fairly for the political tattoos article. 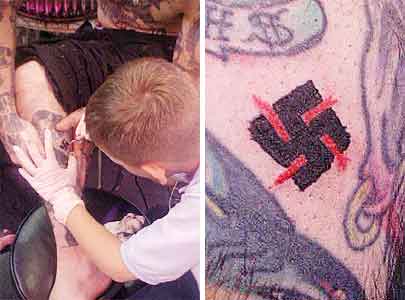 If you have tattoos along these lines, I am interested in hearing from you (for the article). Again, the purpose of this article is not a poltical debate — the goal is to talk to people who feel strongly enough about their political views to have them tattooed on themselves.