Rebekah gets the credit for finding this picture and inspiring the caption: 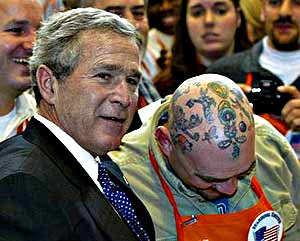 Tattooed man hangs his head in shame
as he realizes who he is standing next to.
Comments (0)

One of the things I like about BBQ shirts and contributor shirts is that they can be as goofy as I want because they're not commercially constrained in any way. Below is something I'm considering as one of the year-end top contributor shirts for 2003. The middle picture is the design itself, and the two outside samples are possible fonts… If you have feedback on which font works, please say so (especially if you're in the running!).

When Rachel saw it she sort of rolled her eyes at me, so maybe it's a dumb idea, but… I always thought Dude, Where's My Car is a pretty funny movie. So that's about where my level of humor starts.


UPDATE: The following variation on the central picture has been proposed:

If you read my page regularly, you know that combat injuries (legs blown off, brain damage, and so on) are very high in Iraq and there is a concerted effort on the part of the Pentagon to hide these injuries — everything from classing land mine injuries as “non-combat” to banning reporters from funerals and hospitals. Well, they've reached a new low.

The latest “tactic” in misleading the American public as to how many of their children are being mutilated in Iraq is to deny Purple Hearts to those injured in combat (more). That's pretty vile… What kind of person does it take to say to a kid with no legs on account of stepping on a land mine while out on patrol, “Oh, you screwed up on your own time; those injuries are your fault and have nothing to do with the military.”

In other news, I wanted to do a mini-analysis of this story, “Body art no longer shocks, only shrouds personalities“, written by the bigot and moron Alex Watson:


Like so much else, the '60s changed that. In the never-ending quest for shock value that was the decade 1965-1975, breaking down established gender roles was all the rage; women wore (gasp!) pants, and men grew their hair long and got (gasp!) earrings. It's fairly obvious who got the better side of that bargain!

Ignoring his comments on “earrings on men” and so on, step back not too far and the first thing you see is that Alex Watson thinks women are “lower” than men — suggesting that for women to be allowed to do activities which he sees as masculine is good for them, but for men to be allowed to do activities which he associates with women is bad for them… He's basically saying “the world was better when men were men, and women were women” with a dose of “men are better than women” thrown in for good measure.

Since those heady days, piercings and tattoos have broken out into mainstream America, despite efforts to resist their advance.

Despite efforts to resist their advance? What the hell does that mean? It's a disease brought on by the lower classes, or worse yet, effeminate men, one that “good upstanding men's men” like Alex have been fighting against in the streets?

Soldiers got tattoos to show their devotion to their units (and tolerance for pain); now the rallying cry for body art is "self-expression."

Yeah, because devotion to the government is soooo much better than self-expression. Oh no! That dude is thinking for himself! Draft him now!

Equally mystifying to me is the insistence women have for placing tattoos in out-of-the-way places. ... All the women I know with tattoos place it somewhere that only extremely low-cut attire can reveal. In essence, they get tattoos that no one can see unless they want them to.

Does this dipshit not understand women at all? Did it ever occur to him that perhaps they're getting these tattoos not for him to jerk off over when they are seen by him in the street, but to be sexy with their partner in private? It should be pretty damn obvious — has he never heard of lingerie? Or is he angry that people wear lingerie under their clothes, not on top?

The race is currently on to find the next big piercing spot -- the one that all the rebels around will flock to have perforated. The first big thing was the gender-crossing: men -- straight men -- with earrings! Then we had multiple ear piercings; then nose rings borrowed from the bovine world...

Oh no! Men getting earrings — are they “trannies”? Are they “queers”? Straight men are defiling themselves this way? Oh no! Oh no! Anyway, it's one thing to whine about piercing, but to just fabricate piercing trends and piercing history to make one's case seems a little lame.

What's wrong with the way God made us?

Ah, the faith-based argument, last bastion of the whining babies. God — if we're to believe the Christian Bible — has no problems with you piercing or tattooing yourself… And if we're to believe the texts of other holy books, the same holds in the vast majority of them. This all, combined with Alex Watson's other whining articles (“there's too much profanity on TV”), leads me to the inevitable conclusion that Alex Watson is simply another prejudiced moron.

And now for something lighter to finish off this update; an email I received this morning:

Subject: did it hurt
From: faye loughrey Hi shannon my name is faye u sound nice i wondered iwant my belly dun my parents will let me but it is sssssssssssoooooooooo long to wait i av got to wait till 2 weeks before xmas please cud u help
luv faye

Um… Wouldn't that mean you only have to wait three days?

So I'm working on the crosslinking analysis tools for the encyclopedia (just realized that they weren't handling misspellings properly), and when I finished I shut everything down and logged out. Except I didn't actually hit log out — I hit SHUT DOWN.

After that I went outside with Jon and we talked about how easy it would be to hit the wrong thing when logging out of a Terminal Services Client session… Then I walked to the kitchen to have my hair braided.

The phone rang and it was Danielle to say that the server was down and it wasn't responding in any way. Talk about deja vu. Anyway, my apologies for that. Really dumb mistake!!!

So a few evenings ago Blair calls me up and says, “hey, I've been having dreams the last few days that you were living in Toronto again and I thought I should give you a call and see what's up.”

What he didn't know is that for the past little while Rachel has been thinking more seriously about spending a year or two in the city as we wait for the farm legalities to play out — and to give Nefarious access to language-immersion daycare and other opportunities that are hard to provide in Tweed… The day that Blair called she'd just submitted an application for a place.

Just got a phone call letting us know it was a done deal… So come January 1st we'll be spending some of our time in a large 27th story penthouse apartment overlooking Lake Ontario and Toronto's High Park. How sweet is that? A downtown apartment with a thirty foot balcony overlooking the forest.

There's some other huge projects happening, but they're still a secret. From my point of view though I can tell you that this will allow me to do two big things in January (on account of being on a proper dedicated high-speed link):

It'll also allow me to work more closely with some developer friends to do some really cool cutting edge stuff that I've been planning for a while like the IVR tools. See you there…