I'm in Tweed again after a day and a half of shooting, tattooing, and interviews with Ryoichi, Jerome, Badur, Phil, Blair, Tom Brazda, and Shane Faulkner (and sdfgdfgd who I forgot to mention — sorry!). Here's a still from some of the SAVED filming. This is early in the night… It's really strange to see it fully inflated: 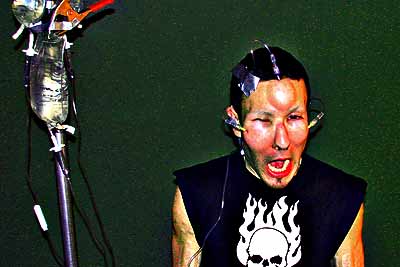 Other than that I've gotten a little more feedback on the edge article, but not much. I assume that most of the people who “don't get it” have finished emailing me. I actually find it strange that people walk away with the perception that the article is saying violence is the norm (it just says that it exists and is a serious problem, which is hard to deny) — it really makes a sad statement on people's reading comprehension.

Given that I called the violent stuff a “stereotype” and said it was the minority, and that the people who I talked to all basically said it was a few guys ruining the party, not everyone, and then it concludes with saying that edge is a good thing, it's weird. I can only assume that the tiny minority complaining represent or are sympathetic that violent subsector. Don't get me wrong — as a vegan I understand what draws someone to eco-terror and so on, I just don't believe that violence is a good idea.

Anyway, this is what the signs on the highways to Toronto have looked like for the past few days: 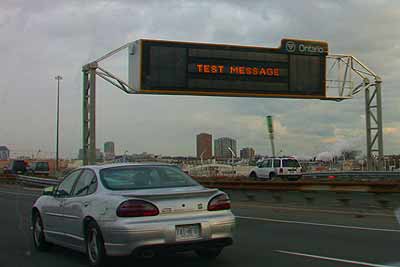 I probably won't be online much more tonight so I'll reply to pending messages tomorrow morning — we didn't wrap up the shoot yesterday until 3AM, and then I got tattooed this morning.

I've got to rush out of here now for some filming and tattooing. Note to the various people threatening me with violence for saying that they are violent: I will be in Toronto for 24-48 hours depending on my schedule. There are pictures of me in the gallery above right so you'll know you're attacking the right guy — the tattoos make me easy to spot. Today you'll be able to find me in the Queen West Soho and Parkdale, and tomorrow I'll probably be around the Church/Wellesley area. Lookin' forward to a little bit of the old ultraviolence!

PS. While Canada got shut out (more), Bush donors are being handed billions in contracts — a suitable thank you for the millions they invested in Bush (more)? You know, this sort of thing makes you realize that modern war isn't free of looting.

By the way, how have recent liberations gone (more)?

Check out this message from someone who felt that the article unfairly characterized militant straightedge as violent (this is a shortened version; if you want the full one it's in the article). Gotta love it when people use threats of violence to try and prove that they're not violent, ha.


Serisously what in the hell moved you to write that rediculous article. im courage crew. Me myself have a wife and kid and I work my ass off to provide for them. Im a member of the United States Navy, and it really gets me to know that I might have to actually die defending a piece of trash such as yourself.

My advice to you would be retract that article, write and apology and get a fucking life. i know just how many people you pissed off, and i have a smile on my face knowing that you'll be looking behind your back for a lonnnnnnnng time. Just remember this, someone knows someone, who just might possibly know you.

What, I interview people who say something critical of Courage Crew, and now they're sending me threats? Way to go making your point, dudes.   The couple of “everything you wrote is wrong, and it's so stupid that I won't even write a rebuttal, so I suggest you remove it now” arguments I got weren't too convincing either.

While most of the feedback is friendly and benign, the straightedge column definitely struck a chord with a few more militant members who felt unfairly characterized as violent, and responded with anger. If you've got feedback, please email it to media@bmezine.com (that goes for all articles); I'm posting the letters at the end of the article.

One thing that's very clear is that straightedge has many facets — with each one absolutely certain that they and only they are the “true” edge. So I guess no matter what I write on this subject, someone thinks they're being mislabeled. Anyway, I do appreciate the feedback.

Other than that I'm still chugging along a little on Sunday's update, so some of you might actually get emails with passwords and so on tonight. I'll mention a little bit of war news; sorry I haven't had time to much recently — but to be honest, not much is changing over there. I expect it will have to soon on account of the 2004 election.

The US government's “Iraqi Governing Council” has opted to have the Iraqis stop counting civilian deaths, and has ordered the stats department to not release any figures that it currently has, saying only “we're trying to keep civilian deaths to a minimum” (more). What, have they got Rafti working for them? “Honest, I haven't killed many civilians… but the stats on it are top secret!”

Not only are Iraqi children and civilians continuing to die, but the US is doing more “accidental” bombing runs on civilians in Afghanistan (yes, that's still going on), killing six children in a recent attack in Paktia (more). They say that it's the children's fault for being too close to terrorists (who turned out to have left the area days before the bombing run) — the US response? “I can't guarantee that we will not injure more civilians.”

But it's not all roses. Young Americans are continuing to be killed for corporate greed in Iraq (more). Every day, more coffins go home (but you won't see that on the news because the US has banned their media from covering it) while Halliburton continues to get wealthy — charging the US military over double what others in the area pay (more).

Of course, Bush could literally tear his face off and reveal the skin of a reptilian overlord (more), and he'd still get re-elected with a majority. Thank you Diebold, we love you (more, more, more).

Below is a very not to scale timeline of human history. I've marked periods where body modification is “normal” or “semi-normal” in red, and periods where it's not normal in black. For most of human history, body modification has been a natural part of life. It's only in small pockets of history where it hasn't been very accepted. Here in the West we just finished living through one of those spiritual droughts.

They say that you can see more from farther away; you have perspective. It's why time seems to pass so slowly when you're young and why it flies by as you age. If in the diagram above you look at the complete timeline, you'll see that the norm is mod-friendly culture — but if you look at only a tiny window, you could get the opposite impression.

People always ask me in interviews “when is this trend” or “when is this fad” going to end? What I realized is that we are currently watching the trend end… and the trend isn't body modification. The strange fad, the strange trend, was that period of human history where we didn't mark up our bodies as a normal part of defining our identities.