If you're wondering why I'm way in the background it's because one of the front wheels is seized (and one of the rears is totally flat), so we used the truck to winch it off the trailer and I'm running that, not being lazy. It took a bit of forceful pushing from the lot of us, but it's in the garage, desperate to be cleaned. I don't know if I'm going to tackle the rear end or the light pods first. None of the work the car needs is particularly difficult… more time consuming than anything. 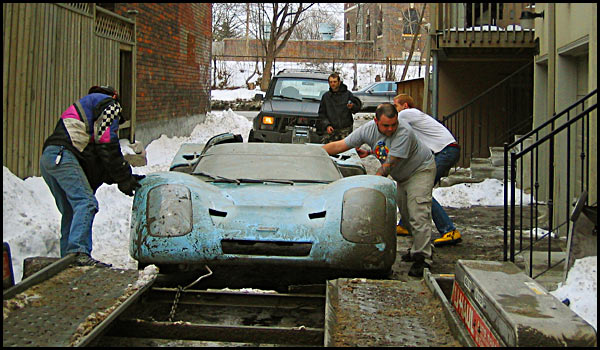 Among other nice things… I get a phone call;


“Hey, this is Billy — you'll never guess what I've got on my trailer right now!”

So tomorrow morning some time my old chopped up Elite Enterprises Laser 917A will arrive in Toronto… So hopefully in my little garage this winter I can get a good amount into the transformation that's badly photoshopped below. It's pretty much just fill work and smoothing out (and replacing those giant light pods with something more modern, and I suppose a little TVR-ish). It's sort of a Speedracer-y very low “Lola T70 has the bastard child of a dunebuggy” thing…

Lots of foam and filler… But that car has been sitting in a ripped apart state for so many years that it will be very, very nice to finally finish it. The chassis has got to be toast, and because it's got American registration it would be a pain to reregister in Canada, so I think I may just treat it as a rolling plug and take a mold off it.

I got a new phone. I think I may have bought a girlie model but that's what people told me about my old phone. It cost just over $100 so it was the cheapest phone I could buy. When my RAZR comes back from (warrantied) repair I'll probably sell one of the two of them, since they're both selling for way more than I paid. 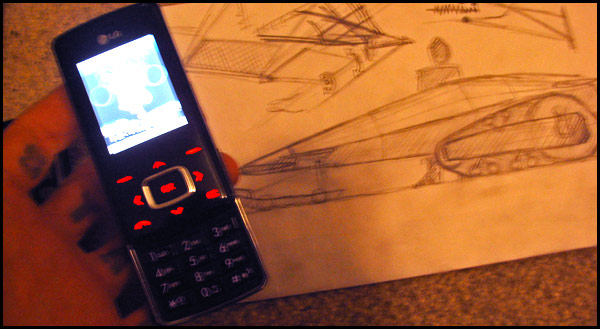 I drink liquor out of a cat dish too

This drink looks deadly — 2750mg taurine, 686mg D-Ribose, and 343mg Caffeine and a whack of vitamins. I can't imagine it's that healthy. I drink these things in part because I basically don't sleep unless I'm on painkillers (last night I took one of my last two codeines, which are just enough to get me about six to eight hours of catch-up sleep)… But really the reason I wanted to post this is that I think it's brilliant packaging and cross-marketing. 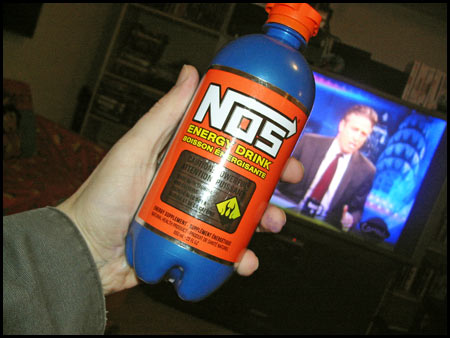 Anyway, maybe that stupid funeral home got told by the city they have to stop parking (illegally, I presume) their hearse on a snow route and during rush hour, so when I drove past them today, they just had pylons out in the street “claiming” the spots. Oh, and to put it into context, they do have a massive parking lot in the back, so this is not required or anything.

If I'm not letting 3' snowbanks stop me, I'm not letting pylons stop me. So yeah, they're out a few pylons now. I'm actually getting curious about it now, and might call the city and find out of funeral homes have religious exemptions from parking codes or something. If not, I'm going to demand that either they start towing their vehicles, or I get a $150 refund for when they towed me for parking in essentially the same spot. I don't care that they have more money than me, and I don't care that they have more corpses in their basement than I do.

Other than that, Nik's Celtic Colnel is doing the blog rounds…

We've got fresh snow, and many of the side streets haven't been plowed yet so it's a lot of fun to be a big truck today! I'm in full-time 4WD of course and have enough clearance that pretty much nothing will stop me — it's enormous fun being able to drive in the side lanes that normal vehicles can't handle, so in this weather I can sometimes get lucky and get places twice as fast, as if there's no traffic… And you can't beat powersliding and doing donuts in parking lots! 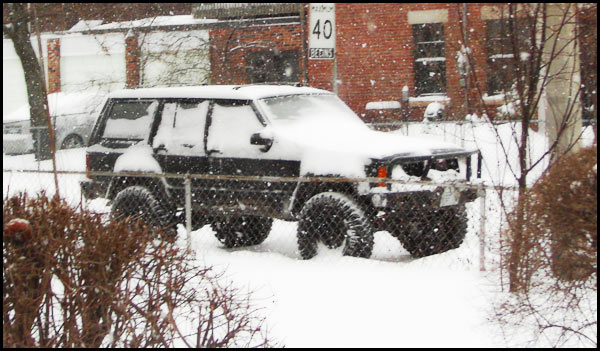 So yesterday at supper I was getting talked to slash hit on by a sort of drunk, possibly low-functioning (or high), hippy. I was really tired and didn't really feel like talking so I just sort of said “yeah” to whatever so she kept talking which was very awkward but sort of fun. At one point she asked if I was from Africa and I just kept the “yeah” going. So she explained the cultural differences between Canada and Swaziland and that here apparently it's ok for a woman to buy a guy a drink. After she finished talking to us, she centred on the next guy to come in, and then eventually an Indian woman who I think had trouble restraining her laughter when she was told that I was an African warrior.

That said, my memories of childhood are such that if I actually had to tell this lie to someone who wasn't drunk, I could probably do it and believe it while doing it. My father really did drill into me not only warrior culture and my only experience with tattooing as a child was the understanding that you earned them through challenge, and my mother, who really is from Africa, exposed me to graphic “how-to” books on African body modification… and the whole time I was being told I could be anyone I wanted to be. So who knows what role that played, but it's certainly a foundation I could use to tell the story, especially if I transmogrified a few (also true) stories about not having English as my first language and so on.

Anyway, it was all friendly enough and nice, but I don't like it when potentially crazy people approach me and start telling me about my aura (because so-called “crazy” people see the world unfiltered, so they can full-on see things that others can't see consciously, but can only experience as a sort of a “vibe”). Laugh it up all you want but I've been able to see auras naturally all my life, and megadosing psychedelics certainly amplified that. I was talking to a friend the other day trying to explain how to do it, and for me, the visualization thing is just “turning my mind inside out”… It's hard to explain but basically you relax completely so you feel really swollen but empty and then you let that space all fill up with energy, which will bring you to a point where you feel like you're going to have a seizure (sort of like the feeling of a really big sneeze building), and then you pull all of that up into your head and use it to sort of push in from the outside of your brain toward the center while at the same time rolling the outer edges of your brain down and pulling them into the hole you're making with the energy you're pulling up, and in the process “turn your brain inside out”. I don't know if that makes any sense at all. It may only to others that do it. Anyway, my theory is that these visualization exercises allow me one to transfer the seat of consciousness (the part of your brain that's currently dominant in terms of defining your relationship and understanding of the world), and by pushing consciousness into areas that would normally be subconscious, you get to watch all the behind-the-scenes image processing (which is of course based on intuition, experience, memory, knowledge, data from the full set of senses, and much more than just visual stimuli)… I don't think that what I do is in any way abnormal or unusual, and I certainly don't think it has supernatural overtones. But anyway, it's not something I like to be approached about.

Today is going to be a long day. I went to bed early but only got about four hours of sleep because my knee kept me up. I think that having no sensation for a while has reduced my pain threshholds. Anyway, after I post this I'm going to head off for an hour at the gym, first time since the surgery… And after that I committed myself to serving pizza to kids at Nefarious's school because one of the other parents previously scheduled bailed, and literally every single other person refused. So I'll probably be pretty dead by the end of the day.