Should I succumb to temptation?

So as you guys may remember, I sold all my sportscars a couple months ago because I thought I was moving. Plans got a big jumbled so now I find myself without any toys… I even made the mistake of giving away my 650 HP Corvette beast because I didn't want to see it sold to some dope who wouldn't appreciate it — mistake's not the right word because I know it's at a good home though. 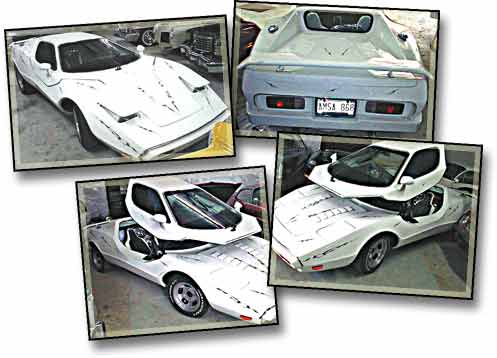 Anyway, the car above is for sale down the street at a fair price. The owner has really made it look kind of gaudy with a harsh two-tone color job and overdone pinstriping, but I'd paint it anyway assuming those stripes aren't just stickers! I've been a big fan of this car since I was a kid, mostly for the “doors” so who knows. I'm all about these plastic fantastics.

Some of you may remember my original claims that Bush was painting this as a holy war (more; third movie down). More recently I've been quoting Lt. General Jerry Boykin, the deputy undersecretary of Defense under Rumsfeld. About a year ago he was giving a talk with photos taken in Magadishu — one of the photos had a dark mark over the city. He interpreted it literally,


This is your enemy. It is the principalities of darkness. It is a demonic presence in that city that God revealed to me as the enemy.

Boykin believes the world is in good hands under Bush, because,


[Bush is] a man who prays in the Oval Office. George Bush was not elected by a majority of the voters in the United States — He was appointed by God.

This all plays out in an apocalyptic game that Boykin almost sounds like he's looking forward to, saying,


We in the army of God, in the house of God, and in the kingdom of God. We have been raised for such a time as this. Anyone who puts on the armor of God becomes a target for Satan. Be ready. He will be coming. He'll try to stop you from doing what God wants you to do. But you knew that already.

Rumsfeld says that he won't do anything to stop him, because he doesn't want to interfere with “free speech” — what he of course ignores is that when a highly decorated general who's getting promoted to higher and higher positions says these things in uniform, he's saying them for all Americans… in effect telling terrorists that, yes, this is a war of Jews and Christians trying to destroy Islam (which I don't believe it is, but Boykin probably does).

Oh, and I am currenty receiving spam at a rate of one every 4.3 seconds. I believe I have determined the source… could it be… SATAN?

Notes from a subway ride

If you care about the people who the corporations have tricked into signing away their lives to increase profits, you may want to read this article. Below are some excerpts.


Hundreds of sick and wounded U.S. soldiers including many who served in the Iraq war are languishing in hot cement barracks here while they wait -- sometimes for months -- to see doctors.

The National Guard and Army Reserve soldiers' living conditions are so substandard, and the medical care so poor, that many of them believe the Army is trying push them out with reduced benefits for their ailments.

[One] soldier said that after being deployed in March he suffered a sudden onset of neurological symptoms in Baghdad that has gotten steadily worse. He shakes uncontrollably. He said the Army has told him he has Parkinson's Disease and it was a pre-existing condition, but he thinks it was something in the anthrax shots the Army gave him.

"They say I have Parkinson's, but it is developing too rapidly," he said. "I did not have a problem until I got those shots."

[Many soldiers returning from Iraq] described clusters of strange ailments, like heart and lung problems, among previously healthy troops. They said the Army has tried to refuse them benefits, claiming the injuries and illnesses were due to a "pre-existing condition," prior to military service.

[First Sgt. Gerry Mosley] said he was healthy before the war; he could run two miles in 17 minutes at 48 years old. But he developed a series of symptoms: lung problems and shortness of breath; vertigo; migraines; and tinnitus.

Soldiers make their way by walking or using crutches through the sandy dirt to a communal bathroom, where they have propped office partitions between otherwise open toilets for privacy. A row of leaky sinks sits on an opposite wall. The latrine smells of urine and is full of bugs, because many windows have no screens. Showering is in a communal, cinder block room. Soldiers say they have to buy their own toilet paper.

Mosley says he has never been depressed before, but found himself looking at shotguns recently and thought about suicide.

The Pentagon is reportedly drawing up plans to call up more reserves.

OK, this is extremely childish, but also kind of funny… in an extremely childish kind of way. Anyway, the latest article got linked on Fark, with the typical dumb-ass commentary. A couple people hotlinked pictures, so I decided maybe it would be fun to change them.

I don't know how fast their screening process is for removing stuff like this, so there are a couple screenshots. Well, I thought it was funny anyway.