Do you know this?

Don't know how to stop this war? Consider this:

America is still a democracy… But it's not a democracy in the way you think it is. America is becoming the pinnacle of capitalist democracy. That is, the corporation tells the government what to do.

Know who you are buying from.

Thank you to Saira (who once had a relative sawed in half ALIVE for not converting to Islam) for directing me to this document based on one released by the Oregon Center for Public Policy. Please read it. Please forward it to anyone you think it would help. I absolutely stand by my statement that anyone who supports this war without knowing the below is stupid, and that anyone supports this war while knowing the below is evil.


Do you know enough
to justify going to war with Iraq?
Comments (0)

So while a couple people have sent me messages of support, the overwhelming response from people watching the videos is anything from the light “how dare I try and make this war appear wrong” to accusing me of being a terrorist sympathiser and even a war criminal. I hate watching all this. War justified by lies, with a bunch of morons cheering it on blindly.

I don't know how many times I've heard bullshit like “but Iraq executes POWs” (a statement the UK has retracted) or “but Saddam gassed his neighbors” (he gassed who everyone thought were a terrorist camp, with US weapons, under US direction), and other total crap like how this will free the people of Iraq in some way. Any decently informed person knows this to be false.

I have come to the conclusion that this war and this President are supported by two forces: 1. The extremely stupid and uninformed. 2. The extremely evil and selfish. So… Which are you? Stupid? Evil? Or against war and killing? If you fall into the first two categories, you're a pathetic excuse for a compassionate human being and I hope one day — soon I hope — you realize what you've wrought.

If I didn't believe killing was wrong, I'd be wishing you death right now. 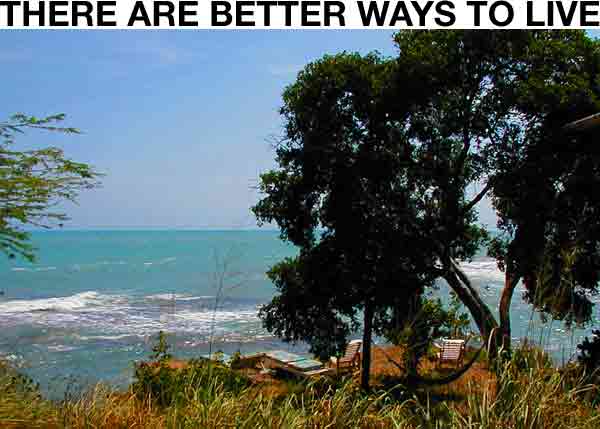 This all is making me seriously reconsider the work I put into this site and other community projects. Why should I try and improve the lives of people who support murder and commercialized butchery? Does that not put blood on my own hands, to give comfort to you demons? Or should I set up the system to only offer new features to those of an anti-killing stance? It wouldn't be hard to do.

I feel like I should just refocus myself on subverting “the system” and making as much money as possible, and then using that to create a homeland, a sanctuary for those of us here who are unwilling to be a part of this evil, to live in peace. A place were we can farm. A place where we can express what we believe is good through art and gardening and just refuse to take part in all of this.

(And yes, that project is still alive and well for those that have followed it over the last few years).

I don't know if that would make me happy. But I think it would make me happier. Those that choose to join me are welcome, as long as they help with tend the gardens… There are better ways to live. The question I suppose is whether we choose them.

OK, later today I'm going to make a video collage; I've got a little spare time today and I've been recording lots of stuff off CNN that I think people should see… This morning I recorded shots of Iraqi POWs sitting blindfolded in little barbed wire cage with no blankets or even a jacket as storms raged around them… In the foreground was a US soldier proudly talking about how well treated the Iraqis are and how they should be lucky to surrender and get this great treatment… I guess he didn't realize what was in the background of the shot.

It was pretty weird… Remember, the American POWs in Iraq have said in interviews with al-Jazeera that they're being treated well, and if you don't want to believe that (coersion is of course possible), the POWs from the Afghanistan war (and the Taliban is definitely more brutal than Saddam) all said they were treated exceptionally well, and in many cases said that they had better food and sleeping quarters than their captors, who basically treated them as guests.

Well, like I said, I'll let the footage speak for itself and people can draw their own conclusions from it…

On more pleasant news, I expect that the IM-bot (that is, the taskbar-based IM checker system that sits in your Windows tray and notifies you whenever you have new messages) should be out for public beta today. I will also be looking for a Mac programmer to replicate it for the Mac (this is a paid contract job) so if you're a qualified Mac programmer, I hope I'll hear from you after you've had a chance to try out the Windows version.

Who will take the fall?

I'm getting a lot more mail than usual today telling me basically these two key points, and I wanted to address them:

But the American people will answer for these crimes, whether they supported this war or not (apparently 80% do). It is you that will be hurt when the reprisals and consequences start to roll in. Whether you like it or not, it's your name that's getting written on those corpses, and it's your corpse that the parents and relatives will demand in return. Bush is immune.

As far as including the American flag in the pictures, you have to realize that these killings in Iraq are not happening anonymously. I include the flag because people are so conditioned by images of violence on TV that unless they're “personalized” they get ignored. It's a horrible truth of the TV society we've greated.

If it really hurts you to see the American flag associated with them, then you shouldn't argue to hide the name of the aggressor — you should argue to stop the aggression. Me adding a flag doesn't change the event — and it's not there to “hurt” you or be “mean” to you — it's there so you understand, with brutal honesty, what is being carried out in your name.

Remember, the most patriotic thing you can do as an American is stand up to your government and tell them to do what you ask. If America is a democracy they must listen. So call your Congressman. Write a letter. And make sure everyone you know does the same. Because like it or not, this war is happening in your name and you will be paying the price both in blood and in cash.

>About the pictures of the people hurt, and mangled on
>your page. I was somewhat for war before this war started.
>After seeing your side of it....I am ashamed to be an
>american. Just thought I would tell you that.

Don't be ashamed to be an American -- be proud to be an
American and do what you can, as an American, to stop these
people from committing these acts in your name.

I don't know how many people watched Bush's rally today for the troops in Flordia, but I record all of them. They're crazy to watch. Seriously crazy… I have no idea how people can watch him tell full-on lies (today included things like implying that Saddam was ready to launch chemical strikes on American soil, that al-Qaeda had been defeated, etc.) and not say “what the hell is going on?”… Part of me thinks his handlers are trying to get him assassinated.

Anyway, I'd like to quote from today's “Hand of God” speech, as I like to call it:


"I want to thank Chaplain Stone. I appreciate your words of prayer for [our military]... People acorss this country are praying. We pray that God will bless and receive each of the fallen and we thank God that liberty found such brave defenders.

The liberty we prize is not America's gift to the world, but God's gift to humanity. May God bless America."

Um… Is it just me, or is Bush saying that (a) this is a holy war and America is acting as the hand of God, (b) God hand-picked the American troops to fight Satan's army, and (c) any fallen troops will go straight to heaven, presumably to their holy harem of virgins?

I'd like to know what church — and what God — gave Bush that authority. The Pope has said Bush is going to hell for this and has said that any soldiers killed in action are going straight to Hell where they will burn for an eternity. That's straight from the Pope. Don't want to believe the Pope? Even the Church that Bush claims to belong to has said the same thing. (more)