Nefarious and I spent the day at the CNE and got ourselves unlimited ride passes which was tons of fun — there were basically no lines so we must have gone on forty or so rides in all (to say nothing of walking end to end a couple times, watching a trick riding show, going through every pavilion, and more)… There was an express bus straight to the front gates from the station next to our house, so it was super easy to get there. Still, we walked all over the place, and did so much stuff so I'm totally tired out! Oh, and I almost lost my camera taking those DIY roller-coaster photos, haha… 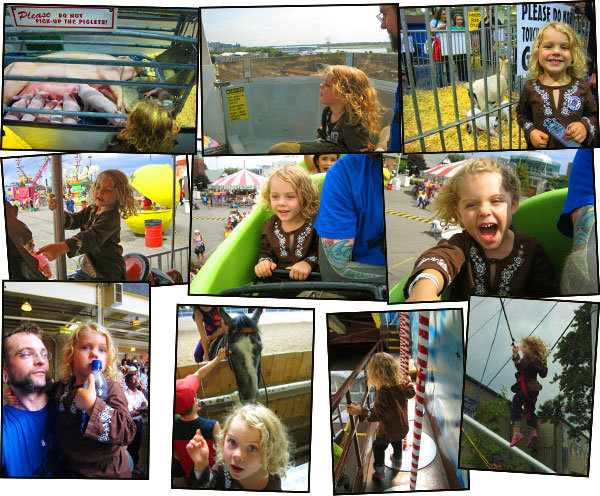 Oh, and because I hear so much hushed comments along the lines of “look, he has long ears, why does he have long ears” coming from little kids, followed by them being quietly admonished by their parents to not ask questions and not stare, let me say to parents very strongly: by all means, encourage your kids to ask me those questions! I'm happy to talk to them, and won't say anything inappropriate.

Really, if this world has a definitive cultural problem, it's that people who don't understand each other don't communicate with each other, and emphasizing that's how it should be to children does the world a huge disservice. The more people of different sorts ask each other questions and learn to understand each other, the better a world I think we'll live in. So don't get your kid in trouble for asking a question — start a polite conversation instead and help them learn the answer and break down a needless social divide.

PS. My leg was essentially sealed up this morning, and there are no signs of infection, so I'm not terribly worried about it. That said, since I tore that suture, I've had really strange (they don't feel bad, more like pins and needles) shooting sensations up my shin, so I guess it must have been wrapped around a nerve in part. Feels kind of nice actually because it's not painful and I'm so used to pain in that region.