Does that make me a legend?

So one of the really fun things about getting tatttooed by Matt yesterday is that it brought back all sorts of art memories from the ancient past… and then Saira and I pulled an old box out of my storage space and I found some pictures. The two kind of cruddy paintings below (I think about 6'x6' each but I'm not sure) were part of my highschool work, circa 1990… 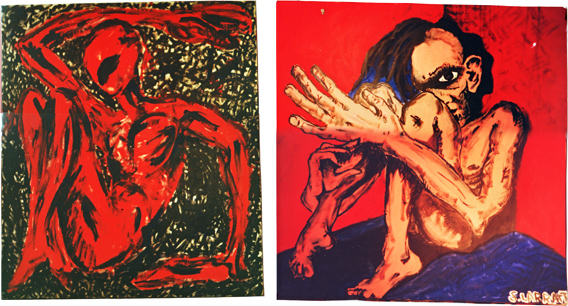 (I really want to emphasize that's fifteen or so years old).

In retrospect, my highschool art program was incredibly cool, and I don't think it would ever be tolerated today. With full knowledge of school officials, my final year's art project was largely on the effects of LSD on painting and sculpture, with a secondary focus on blood art, so I actually did acid at school while working on the project for the entire semester, under teacher “supervision”. But it did end up getting me a scholarship so I guess it wasn't such a terrible idea? I mean, all of my grades were 92% and up, and several of my courses I literally wrote a perfect test every time and ended up with a hundred percent in those. So while the school played loose with the rules, I got a great education from teachers that took serious risks to allow me to express myself and do well at the same time.

Anyway, I've written in the past about how I once “poisoned” my university peers as a part of my performance art class — please read the crazy story first if you don't know what I'm referring to. Anyway, as I mentioned a few entries earlier, I dropped out of school after the first year, preferring dealing drugs and stealing to going to school (yeah, ok, maybe it was a terrible idea after all to do so much acid in highschool — but I do have some funny memories of being on acid, spending the day tossing bales of hay, as my mother accused me repeatedly of being high). In any case, on to the story.

So what I didn't know, but have now found out because Matt managed to stick it through the program, is that every year since then they have told performance art students that they are not allowed to do “shock art”. The more I think about that, the more angry it's been making me. Outside of calling what I did “shock art” being incredibly insulting and shallow, banning the class from creating meaningful and high impact art is the absolute worst lesson that an art school could possibly teach.

And for the artist, real art eventually kills you.

I'm not saying that you can't create something of beauty, but I don't know if all created things of beauty are art (I'm not convinced that most of what I paint is art). Anyway, I think that once you start defining art broadly, it's all art if you feel like calling it art, and then what's the fucking point unless you're an artist as a stepping stone to becoming a zen master.

The statement that I was trying to make with my performance (outside of “fuck you all”, which was a big part of it) was that we live in an incredibly dangerous world, that we're constantly faced with serious risks, and that most people are so stupid that even if they're warned in advance that something is dangerous, they still do it, and don't consider the risk until it personally strikes them. And I believe I pulled that off, because most of the kids in the class freaked out and called their parents and told them they had AIDS, and spent the next year getting tested. As far as I'm concerned, that project probably made half of those kids wear condoms for the next few years, and I'm assuming there's a real good chance that a few of them found out they had undiagnosed STDs. So as far as I'm concerned, my art changed the course of their lives, and that's as effective and valid as you get with performance art.

And fuck any school that tries to ban art while still maintaining the pretence of a legitimate art program.

Eh, maybe I'm just an art bigot or something.