Sorry about my disappearance

Hey everyone, sorry I haven't been online much in the last week or even really posted. It's been a hard week emotionally for a lot of reasons, and it's definitely going to be a tough little while I think for me over the next bit, but yesterday was definitely fun. A whole bunch of us (Phil, Marty, CJ, Tom, Saira, and Clive) got together for an interview with the CBC. This photo is actually stolen from CJ who was the only one of us with the sense to take lots of pictures: 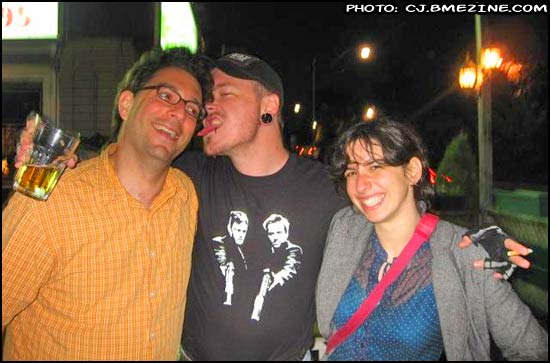 That's the host that he's licking and the producer on the other side. I was a little nervous going into it because I'd heard he was on the conservative side, at least when it came to the “doesn't that hurt?” line of thinking, but once I saw that he was totally into genital piercing (on women anyway), I lost that worry pretty quick. The interview was a lot of fun actually… I think over the afternoon and evening we must have gone through a dozen and a half (ie. about twenty) pitchers of beer, it was insane. Gotta love the CBC.

But I think we all stayed on message and explained our motivations clearly, and I think everyone had a good time, so I've got good hopes for the interview… It airs at like 9:30 in the morning a month from now — sometimes I forget what crazy crap you can put on the radio here even during the day (tons of profanity and very sex-centric conversation). I'll post the info on it when I know when it airs.

Anyway, there's big BME update later tonight care of Phil, and I have loads of new content and projects to work on (due to a sad reason for me, but it's good for you)… Nefarious is visiting Rachel for the next month and a half so I guess Jon and I will probably be working like crazy (and him fishing) both to get caught up, develop some new toys, and to keep from getting too down about missing her.