Strange use of money

So I was looking at Their Levees – Our Levees and thinking about the US budget and how it should be able to deal with the problem… Popular Science is running a feature this month on different ways that New Orleans could be made relatively impenetrable to megastorms. For example, this massive storm surge is capable of handling thirty foot waves. 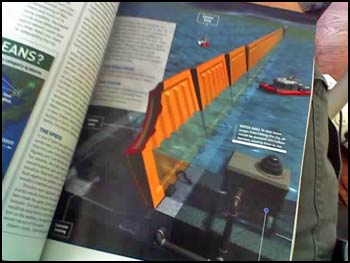 The problem they write, is the cost — a projected $500 million to $1 billion. The claim is that the government simply doesn't have that money to spend… But let's take a look at that statement. Ignoring things like the fact that the US has about two hundred spy satellites up and the latest one is costing ten times the maximum projected costs of the levees (at $9.5 billion), let's just look at Yankee Stadium, for which NY taxpayers are contributing half a billion dollars.

Sports stadiums regularly cost as much or more than the levees are projected to… I guess it's true, America really doesn't care about black people — unless they're dressed in a costume and performing for the entertainment of largely white crowds.

Anyway, in more pleasant news, I made a nice blueberry sauce:

It got good reviews.