"You only get mugged if you go down town"

So I was watching the Care Bears Big Wish movie with Nefarious and they're eating heart shaped sliced-bread sandwhiches (everything is heart shaped in Care Bear land). It's easy to find heart shaped cake and bread pans, but the ones I've seen all look kind of like this:

Now, that's right for a cake, but if you want bread where every slice is a nice heart shaped piece with the crust forming a heart shaped border, it isn't going to do it. It probably already exists (although I couldn't find it online at first search), but I was thinking that a better way might be a V-shaped pan, with a pressure bar on top (to form the top of the heart as the bread rises and rounds it out) that's made of an inverse teardrop-shaped cylinder of no-stick plastic or metal. 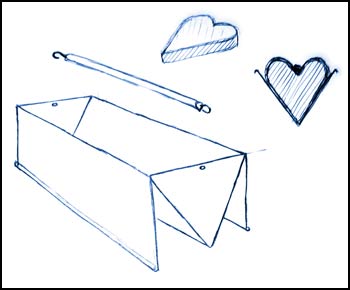 Unless I'm missing something this should give you bread where every slice forms a heart. One day I'll have more time on my hands and I can actually make these things instead of just drawing them. It's funny; Phil has freed up I'd say about 30 hours of my week, and instantly that time has become flooded with other work. Maybe I have too many things I want to do, but I guess it's better than having too few.


Update: Mekare just let me know that there are products that do this called “bread tubes” (see eBay for example).

Speaking of movies, last night Rachel and I watched The Devil's Rejects again. I'm a big fan of Rob Zombie's movies, they're sort of a mix of music video, B-movie horror, and a big dose of classic Americana rebel movie a la Easy Rider as well. I actually think that in time movies like this will be seen as really capturing something honest about the American character and culture that was missed in most mainstream film productions. 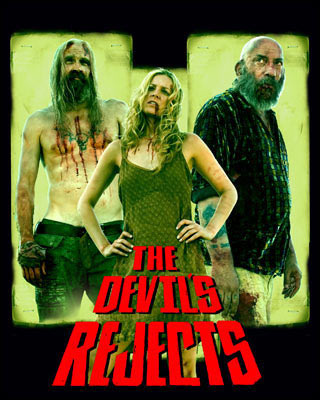 I've said this a few times before, but more and more as time goes by I really believe that the future of America lies in hillbilly and redneck culture fully coming of age. I think perhaps the average city person who feels superior to country folk not only doesn't understand the significant contributions that backwoods America (and Canada to a lesser extent) have made culturally, but also doesn't understand just how fucked the cities are going to be in thirty years.

And worse yet, they don't understand how fucked those who have lived their lives in the city, never having learned a real skill, are going to be in thirty years.