I live in a swamp, not the woods.

First, BMEshop just got its shipment of shoulder bags (ie. purses) in stock… Click the pix to jump to the order page (there are four different kinds right now): 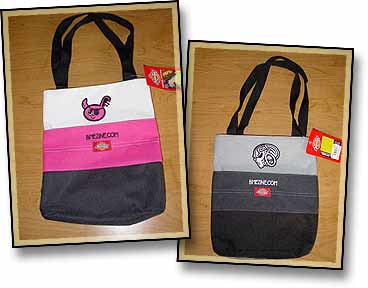 I'm continuing to get feedback on the article — it's quite fascinating how it breaks down. I think without exception so far, the response from self-cutters has been incredibly warm and positive. I have gotten some positive responses from people who are not cutters, but on the whole they've been a lot more negative — as predicted in the article, a combination of “these people are sick and you are encouraging them” and “how dare you suggest that what I do is anything like those people!”

I'm not really surprised though and I don't think poorly of those commentors or anything… It must seem totally foreign to folks who don't have experience in either transformative body ritual or self-injury, so they have these somewhat ignorant knee-jerk reactions. The funny thing is that they don't clue in that it's the same thing that mainstream society does to them — older members will recall that body piercing was banned from tattoo conventions for quite a while.

I'll finish this comment up by quoting an email I got from my father on the article that I think is worth reading:


"You must of course continue to lobby and make safe alternatives available for persons who are going to do something on their own that could be done more safely by trained professionals. But you will not have won till the state returns the sovereignty of each man and woman over his body while his mind lives in it."

Other than that I just got email from a British TV channel that's doing a show on heavy mods. I'd agreed to let them use some pictures from BME/extreme on the condition that they put in a “thanks to www.bmezine.com for the photos” sort of note. Anyway, today they wrote me back to say that they “can't legally put a credit on the photos because thanking a company for photos is illegal under British broadcast law” or something… I told them they could either credit the pix or not use them. If they're going to profit from the site, they can at least promote it in return.

I think people think BME is bigger than it is… Last week I got this email, and for some reason I get messages like it all the time:


"I saw a tattoo in ITA in the December 2003 issue. It's on page 74 in the lower right-hand corner. Can you give me some more info on this tattoo? I would like to have the person who thought of it do it for me, if possible. If not then can you send me a bigger pic via email? God Bless."

I always wonder where they get the idea that BME runs all the tattoo magazines. It's as if I'm some kind of body modification illuminati figure or anything. As much as I'd be evilly thrilled if that was true, I'm just some dude that lives in a shack in the woods that happens to have a website.