It's uploading, have patience…

First a little good news. The upload is on its way and there are lots of neat things, including tons of new pocketing pictures. Thanks to everyone who's been going to an effort to send in pictures… I'm sorry there's this stupid 47k image barrier here — if I could crack that I'd simply integrate adding to IAM and BME into a single click. Anyway, it'll probably take an hour or two for the upload to show.

I really have to stop looking at the news. Here's what I see going on — a country and a plethora of cultures fraught with drought and hunger and poverty and civil war that the collective Western “we” have pushed into fanatacism as they desperately try and simply survive. Now we're doing our damndest to just make it all worse, and letting more of our own children be slaughtered, along with the potential millions of theirs that will die there in the next two years from any number of causes. If I'm to believe Taliban reports (which I suspect they'll be glad to back up with some graphic executions), around 10% of the US strike forces have been captured, and who knows how many are dead.

If this global war is to end, it's not going to end by dropping bombs on the poorest most miserable people on the planet, especially now that they've figured out that we are vulnerable and they can stab us in the heart and cripple us. It's going to end when we wealthy nations and wealthy people (and yes, if you are reading this you are wealthy — not neccessarily by Western standards, but by international standards, you are) start offering aid and making sure that we all have an acceptable standard of living. Happy nations and happy people don't tend to drop bombs on each other. People who are starving and have seen their children and friends die are.

Everyone rushed to give blood and enormous and sometimes even crippling amounts of money to the Red Cross to help New Yorkers and Americans affected by the attack. But let me ask: how much have they given to the refugees of the world? How much have they done to help really solve the problem that makes things like this continue? I understand that it's a natural response, but if you step back and try and look at it objectively, it's just a wealthy nation and wealthy people trying to stay wealthy, and trying to keep everyone else poor. It sucks to admit it, but it's true.

I know that I'm a part of the problem globally. I do my best to succeed in this culture and use the tools the capitalist system gives me to make the world a better place. I know I could do more; I still indulge myself financially far more than I can fairly say is my piece of the pie. It's not right. I hope that at least being able to recognize that is a first step.

I am getting angrier and angrier, and I am not at all an angry person. Well, that's not quite true. I'm extremely angry and extremely hostile and sociopathic and probably quite dangerous when it comes down to it. At the same time though, I grew up seeing a father that was the same, and have spent twenty years developing coping mechanisims that stop me from being like him. I do my best to stick with a “stay calm” mantra. The combination of seeing the lies of the government and media firsthand at the protests, seeing the horror that the west has brought upon the world and itself in the past forty days (or forty years or four hundred years) and the fact that they may well kill family members of mine, some very unpleasant interactions with business partners and financial institutions lately, and probably just the stress of having a puppy in the house (I'm more of a loafy Mastiff sort of guy) is pushing me into a deep rage that is not particularly easy to control.

Thank god I'm not straightedge or I'd definitely lose it.
(That was partially a joke by the way!) 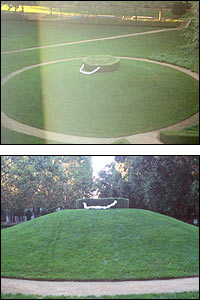